The rumors surrounding the Samsung Galaxy S5 are flying and a sketchy image of the device is beginning to form. According to rumors, successor to the Galaxy S4 will likely feature an aluminum unibody case, next-gen processor and a 2k display. A device showed up on GFXBench today, code-named the Samsung SM-G900S, that could indeed be a Galaxy S5 prototype.

The G900S sports a beautiful high-resolution 2560×1440 display, something that points to it being Samsung’s next flagship. The device also has a Snapdragon 800 processor clocked at a whopping 2.5 GHz, which is a bit faster than the 2.3GHz that the fastest current Snapdragon chips are being clocked at today.

The Samsung Galaxy S5 is expected to rock an aluminum body and a 64-bit octa-core processor, similar to Apple’s A7 chip which powers the iPhone 5S. The S5 has been rumored to feature a 5-inch Super AMOLED display with a 2560 x 1440 resolution like the device in the benchmark, 16 MP camera which will record 4K video, a 4,000mAh battery and of course, Android 4.4 KitKat.

Rumor has it that the Galaxy S5 will be launching in January of 2014, supposedly because of a shortage of Galaxy S4 sales, which has been hitting Samsung’s bottom line. While the Galaxy S4 has certainly been selling well since it’s introduction last April, sales have slowed with the release of other flagship handsets such as the LG G2 and the iPhone 5s.

GFXBench has since removed the Samsung G900S, but you can see the specs in the screenshot below. Let us know in the comments what you think. Is this the Samsung Galaxy S5 or fakery? 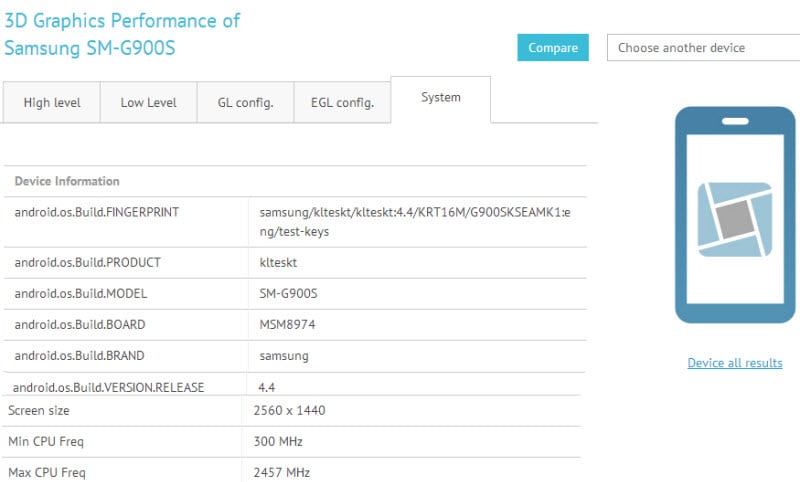