The game includes over 750 actual NHL players and over one hundred official NHL uniforms that players can use to customize them. There are 3 separate game modes: Quest for the Cup Mode is a standard authentic NHL season experience, make the Stanley Cup Playoffs and play in the Eastern or Western Conference Quarterfinal, Semifinal, Conference Final, and then win it all in the Stanley Cup Final to raise the Cup. Friend Mode allows you to play with your friends on Facebook, and Events Mode allows you to compete in worldwide events for prizes!

You can grab Big Win NHL for iOS devices on the iTunes App Store, and for Android phones and tablets on Google Play. For more information about the officially licensed game, the press release follows below: 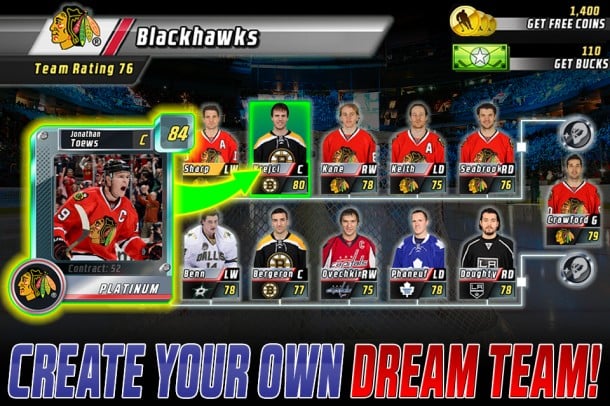 Create a lineup from the best NHL® superstars and

compete for the Stanley Cup®

Featuring over 750 real NHL® athletes and more than 100 official NHL® uniforms to customize them with — all up-to-date with the ongoing 2013-14 season — hockey fans can assemble their best lineups for fast-paced action that unfolds on the ice.

Quest for the Cup™ Mode – For the authentic NHL® season experience, make the Stanley Cup Playoffs and play in the Eastern or Western Conference Quarterfinal, Semifinal, Conference Final, and then win it all in the Stanley Cup Final to raise the Cup.
Friends Mode – Crush Facebook friends or use unique friend codes to go head-to-head with any adversary.
Events Mode – Compete in regular events with worldwide contenders for chances to win big prizes.

Big Win NHL is available for free through the App Store and now through Google Play.

More information can be found on the game’s download pages and at www.hotheadgames.com.

NHL, the NHL Shield and the word mark and image of the Stanley Cup are registered trademarks and Quest For The Cup is a trademark of the National Hockey League. All NHL logos and mark and NHL team logos and marks depicted herein are the property of the NHL and respective teams and may not be reproduced without the prior written consent of NHL Enterprises, L.P. © NHL 2013. All Rights Reserved.

Hothead Games is one of Canada’s largest independent game studios. Founded back in 2006, when our Hotheads barely had cold feet, our goal was nothing less than total world domination. We continue to strive for entertainment in all things, including our award-winning mobile game catalog, our company culture, and even this self-aggrandizing boilerplate that you’re reading right now.

If you're a fan of puzzle games and old school platformers, Edit Mode might have the game for you. UFO...