Back in August of last year we were talking about Pressy, the almighty Android button which plugs into the phone’s 3.5mm headset jack to add new functionality. It can be programmed for a number of tasks such as sending a predefined text message to the select contact, taking a quick photo, opening some app, firing-up the flashlight and so on. Best of all, it supports a number of different actions based on the number of clicks.

Pressy started life at Kickstarter and managed to surpass its fund-raising goal in less than a day. We, naturally, loved it. And now we love Xiaomi for using the same idea (or they bought Pressy – we’re not sure) to launch a similar product.

The newly unveiled Xiaomi MiKey works just like Pressy but with Xiaomi phones. It relies on a dedicated app to enable quick actions without unlocking the phone. The button can recognize up to 10 clicks which translates into 10 different actions (or more, again we’re not sure).

The best thing is the price. In China, Xiaomi will sell the MiKey for 4.9 Yuan which translates into roughly 80 US cents. Yup, that’s less than a dollar. In comparison, Pressy was pre-selling on Kickstarter for full $17 (seventeen dollars)! This, obviously, is part of Xiaomi’s strategy to sell more phones rather than make money from this accessory.

Availability wise, the Xiaomi MiKey will go on sale on April 8th. We’re hoping that importers, such as Xiaomi World, will also be selling these. 😉 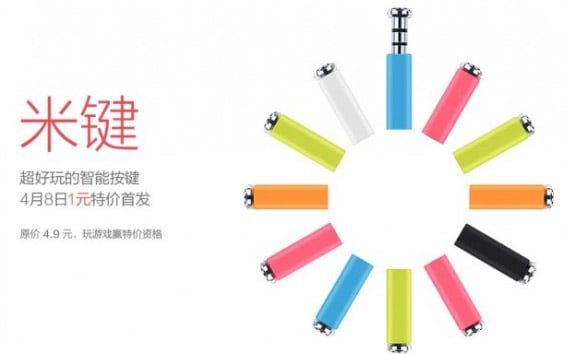 Xiaomi is apparently working on a gold version of its Mi3 smartphone, GizChina is reporting. It's unclear when this fancy...