T-Mobile’s approach to International roaming looks to be making a big impact on the wireless industry, according to a survey conducted by Kelton. The inclusion of international data roaming and text in over 120 countries in T-Mobile’s Simple Choice plans means that T-Mobile customers travelling abroad don’t need to worry about buying a new SIM, phone or worrying about a massive wireless bill when returning home. Here’s a look at the success of T-Mobile’s Simple Global plans, just six months after launch: 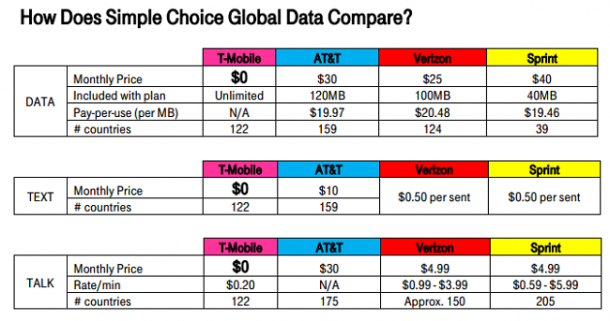 and using 28 times more data than before – all while enjoying major savings vs. carrier customers

BELLEVUE, Wash. – May 13, 2014 – Stop us if you’ve heard this one before. A couple walks into a bar in Toronto with two bored teens and a dog in tow. Father says to the bartender, “I’ll give you $20 to take our picture and send it to the grandparents with your phone.” “Sure,” says the bartender. “Let me guess. Americans still stuck in AT&T’s family plan?” “Actually, we’re a Sprint framily,” says the dog.

To be fair, your choice of wireless provider may have some bearing on whether you find that joke funny or infuriating. If you’re a T-Mobile customer, you’re more likely to share in the laugh. Because, last fall, T-Mobile made text and data free and slashed calls to a low flat rate of 20 cents a minute in over 120 countries and destinations worldwide – making the world your network at no extra cost. And making T-Mobile, hands-down, the best choice for international travelers.

Today, T-Mobile released both initial results of the program and findings of a new survey of international travelers. The data reveal a dramatic contrast between carrier customers who turn off their phones or spend their trips worrying about avoiding overages and T-Mobile customers who travel with more freedom and flexibility than ever before.

“It’s completely outrageous that old guard carriers are still raking in billions each year from these ridiculous roaming fees,” said John Legere, president and CEO of T-Mobile. “That they continue to gouge their customers to the tune of 90 percent margins every time they set foot outside the country is shameful. Americans deserve better.”

The recent survey of international travelers paints a damning picture of just how hamstrung American travelers are by the inflated international roaming fees charged by the three biggest carriers. Nearly everyone surveyed (88%) reported being frustrated by the expenses and challenges of staying connected while abroad. Among customers of the big three carriers, nearly 20 percent leave their devices at home or never turn them on while travelling outside the US. Another 40 percent turn off data roaming to avoid high costs, and another 20 percent say they would turn off data roaming if they knew how. That’s nearly 80 percent of carrier customers struggling to avoid the high costs of staying connected while travelling abroad.

And, they have good reason. When carrier customers don’t get around to signing up for their carriers’ add-on international plans, their costs can total more than $1,000 a day when they use their phones abroad the way they normally do at home.

For Bryan Roberts, who travels regularly outside the US, “T-Mobile’s new Simple Global benefits are going to save me over $10,000 a year,” said Roberts. Just over the past six months, he’s visited 10 countries for business and leisure. “I was just in Europe and the UK for four weeks, and the bill came to less than $150. So the cost savings are huge. But I also love that when I’m overseas in a new place, I can find my way around with Google Maps and use data without having to worry about high roaming charges.”

For companies like MGI International, headquartered in Brazil with Latin America and US operations based in Houston, switching to T-Mobile has led to major cost savings and vastly simplified the process of managing and budgeting for communications between its offices, employees and customers.

“With operations throughout North and South America and a global customer base, I travel a lot and depend on T-Mobile to stay in contact with my team and customers,” said Fred D’Avila, COO of MGI. “Simple Global resolved one of the biggest issues we’ve had with mobile communication: unexpected overages. We realized an immediate savings of more than 40 percent compared to our previous provider and now receive a fixed monthly bill with no surprises or overages.”

“The amazing experiences and huge savings our customers are now enjoying are the very reasons why we launched this program,” said Mike Sievert, Chief Marketing Officer for T-Mobile. “We’re seeing T-Mobile customers learn to cut loose and make the most of their Un-carrier freedom – wherever in the world their travels take them.”

Further information, data and media resources can be found in the T-Mobile Newsroom.

This survey was conducted by Kelton between April 25th and April 29th, 2014, among 1,044 Americans ages 18 and over who have smartphones and have traveled internationally, using an email invitation and an online survey. The margin of error is +/- 3 percentage points at the 95 percent confidence level.

Humor: What Life Was Like Before Smartphones in 5 Hilarious Pictures

Yes Billy, there was a time before smartphones. What was it like you ask? Horrible. Downright horrible. Ok, so it...