Watch out Samsung, a new crowdfunded smartband/activity tracker may soon give your SmartBand some competition. A French company by the name of IroNova is currently raising money on Indiegogo to produce a “universal fitness band” which is marketed as much more than just another activity tracker; it claims to steam up your sex life as well! Finally, a smartband that does something useful! The Iro pairs with a smartphone or PC/Mac via Bluetooth, where data can be uploaded and visualized on the Iro app. While the Iro has no display to speak of, it does have a spiral shaped design that flashes different colors based on the amount of calories you have consumed. This feature is designed to motivate users into burning more calories and being more active when performing even the most mundane tasks.

But wait, what’s that about improving my sex life? No, the Iro doesn’t give you tips or tricks while you’re boning down, but you’ll be more energized and willing to do the nasty thanks to the Iro pushing you to be active all day. I know, it’s gimmicky, and an interesting marketing ploy for sure.

Compared to other smartbands and activity trackers out there, the Iro looks a little more like something a die-hard nerd would wear, not a housewife or business professional. The flat ridges jut off of the circular wristband, making it look a bit strange. Not to mention the big light-up swirly design on the watch, which also looks a bit strange for primetime. 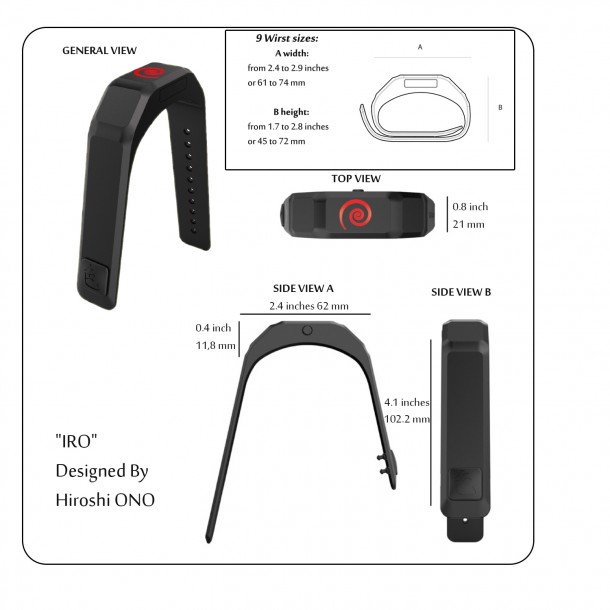 So, is the Iro look interesting to you or is it total crap? Let us know in the comments. Oh, and check out the Iro’s Indiegogo page here.

Founded in 2012, IroNova ™ is a French and US company that creates and develops innovative products. IroNova stands for innovation, technology, design and quality. “IRO” means “Color” in Japanese and “Nova” means “New” in Latin; it is also an uncommonly bright star.

Most people have no idea how many calories they burn during their daily lives. Whatever the activity level, “IRO” allows users to track their daily energy expenditure with the touch of a button. The “IRO” bracelet, with its 3D accelerometer sensor and powerful software, tracks the movements of users’ wrist on a continuous 100-hour basis and shows the corresponding color of the number of calories burned.

“IRO”, with both Bluetooth and USB interface, also allows users to share their “IRO” level and color on Facebook through its application, available on computers/laptops (Windows, Mac, Linux) and Smartphones/tablets (iOS and Android). Users can check their calorie consumption whenever they like through the “Your IRO” app, which saves results on a 6-month basis.
Funds raised through Indiegogo will be used for:
Production tooling

AT&T will be rolling out the company's Voice Over LTE (VoLTE) network in the next week to select markets. That...