Google unveiled two Android Wear smart watches, LG G Watch and Samsung Gear Live. The first of the two has already been announced so we assume this is just Google’s way of reminding us where to spend our hard-earned money. As for the latter, we’ll take a better look at it later in the text.

The search giant’s wearables platform got a big spot at Google I/O in San Francisco, and we expect to see developers lining up to support it in their apps.

Android Wear supports multiple screen sizes and styles, including both square and circular (i.e. Moto 360). It comes with a card-based UI that is used to display notifications, location-based reminders and any other information apps through at it. Speaking of which [apps], developers interested to make their smartphone/tablet apps sing along Android Wear will be able to do that using the newly launched SDK.

Android Wear devices will support any number of sensors that will allow users to track their activities and whereabouts. Google Maps will come built-in to enable turn-by-turn directions on the wrist. Users will either rely on touch-based input or voice control to start apps and get information they desire.

When it comes to available devices, the LG G Watch and Samsung Gear Live are the first Android Wear smart watches you can buy from the Google Play Store. The former is selling for $229 while the latter could be yours for $199. Moto 360, which will be the first device with a circular screen, won’t be available for the next few weeks, or so. 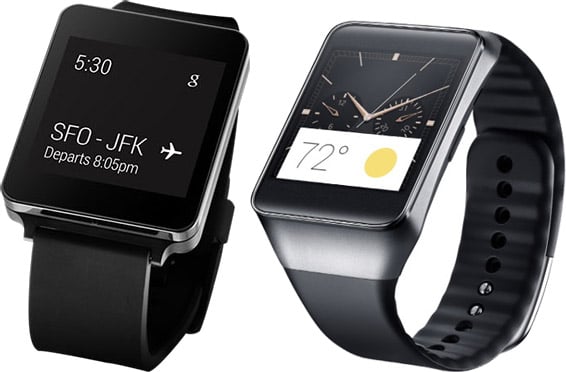 Here’s what the “Korean duo” is all about, specs wise:

For those uninitiated, this isn’t Samsung’s first smart watch. Earlier this year, the company unveiled the Gear 2 and Gear 2 Neo, both of which run Sammy’s own Tizen platform. It’s unclear how the adoption of Google’s platform will affect Samsung’s long term prospects in the wearables space but chances are they’ll be active on two fronts for quite some time.

Meanwhile, Apple is preparing to enter this fight as well, and is working on its long-time rumored iWatch as we speak. From what we’ve heard, this smart watch will be officially announced in October; God knows how the market will react at that time.

Google is making its Chrome OS work a little better with Android devices. One of the features demonstrated at the...