The G Pad 10.1 is the largest tablet in LG’s G Pad lineup which includes 7 and 8 inch tablets as well. The G Pad 10.1 touts LG’s Smart Keyboard, Dual Window and KnockCode features, which currently reside on the LG G3. The G Pad 10.1 also rocks the clean redesigned UI that graces the LG G3. 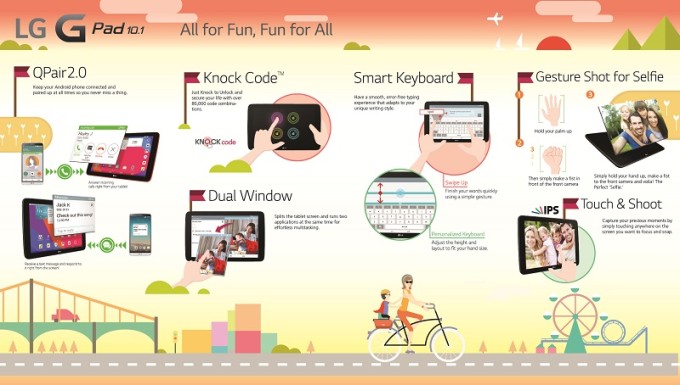 SEOUL, July 7, 2014 ? LG Electronics (LG) announced today the global launch of the LG G Pad 10.1, its largest tablet in the G Pad series (http://goo.gl/Rr9abb). The LG G Pad 10.1 is perfect for on-the-go media consumption as it boasts an expansive, widescreen display powered by an 8,000mAh battery that gives users an immersive multimedia experience and endless hours of entertainment.

The LG G Pad series offers just the right balance of performance, personality and price to fill the gap between entry level and premium tablets. In an effort to give consumers the best experience across its entire portfolio of devices, the new LG G Pad series will come preloaded with the best of the G series’ premium user experience (UX), including a host of features carried over from the LG G3, such as Touch & Shoot, Gesture Shot, Smart Keyboard and Dual Window.

Highlights of the LG G3’s advanced UX features included in the G Pad 10.1 are:
Touch & Shoot: Tapping anywhere on the display will focus and activate the shutter in a single step, saving time and that once-in-a-lifetime shot.

Gesture Shot for Selfies: Simply clenching the free hand into a fist within the shot frame will automatically begin a three-second countdown before snapping the picture for a blur-free photo.
Smart Keyboard: Reduces input errors by up to 75 percent by tracking and analyzing typing habits and intuitively “knowing” what word the user intended to type.

Dual Window: Splits the tablet screen and runs two applications at the same time, dragging and dropping content from one window to the other for effortless multitasking.

LG G Pad devices include unique features to deliver easy connectivity and security. LG makes connectivity more convenient with QPair 2.0, which provides seamless convergence between Android-powered tablets and smartphones via a simple Bluetooth connection. With QPair 2.0, users can receive notifications of calls and messages on a smartphone and reply or answer the call directly from the G Pad.

Knock Code™, the popular and acclaimed security feature that combines powering on and unlocking into one quick step, allows up to four users to register their knock patterns so family members can share the same tablet while still being able to keep their data and photos private.

“Consumers use tablets differently from smartphones and we wanted to highlight the important role of entertainment in the new LG G Pad 10.1,” said Dr. Jong-seok Park, president and CEO of the LG Electronics Mobile Communications Company. “Tablets are increasingly being used as companion devices, which is why we made connecting the LG G Pad 10.1 to other devices so easy and convenient and why LG G Pad 10.1 offers the best core technologies of our G series smartphones.”

The LG G Pad 10.1 will make its debut in the United States followed by other markets in Europe, Asia and Latin America later in the month. Prices and retail availability will be announced locally in each market.

LG Electronics Mobile Communications Company is an innovator and trend leader in the global mobile communications industry. LG is driving the evolution of mobile forward with its highly competitive core technologies in the areas of display, battery and camera optics and strategic partnerships with noted industry leaders. LG’s consumer-centric products ? including the flagship premium G Series models ? incorporate unique, ergonomic designs and intuitive UX features that enhance the user experience. The company remains committed to leading consumers into the era of convergence, maximizing inter-device connectivity between smartphones, tablets and a wide range of home and portable electronics products. For more information, please visit www.LG.com.

AT&T will be offering the LG G Watch and the LG G3 in a little less than a week. Pre-orders...