Microsoft plans to join the smart glass market at some point, having recently acquired virtual reality patents from Osterhout Design Group in a deal worth $150 million.

While these patents obviously play a role in the Redmond giant’s strategy — $150 million is a significant amount of cash, after all — that doesn’t stop the Windows makers from pursuing its own technology. And voila, we have the first glimpse of their plans to share with you, thanks to their patent filing for “Wearable behavior-based vision system.”

Said patent application describes a system that uses smart glass’ built-in camera to recognize objects around you, and add its own content relying on augmented reality technology. Moreover, the system will also be able to predict the behavior of surrounding objects such as cars and display their trajectory onto the screen. Similarly, users will get warnings if there’s a chance they could collide with objects detected by the glass.

The augmented reality technology is one of those “natural” uses for a smart glass, and we’ve already seen some Google Glass apps doing the same. Microsoft’s patent may add an extra layer of usability to the mix, helping the company differentiate its product from other devices. Alas, we first have to see that product and as I’m writing this, we’ve still no idea when that will happen. Perhaps, the Redmond boys (and girls) use their CES keynote time to unveil the first Windows-powered smart glass; perhaps not.

In any case, I used to argue that Microsoft is best off acquiring an existing smart glass maker such as Vuzix to get a head start over other entrants (except Google) to this market; And I still think they should pursue that deal. 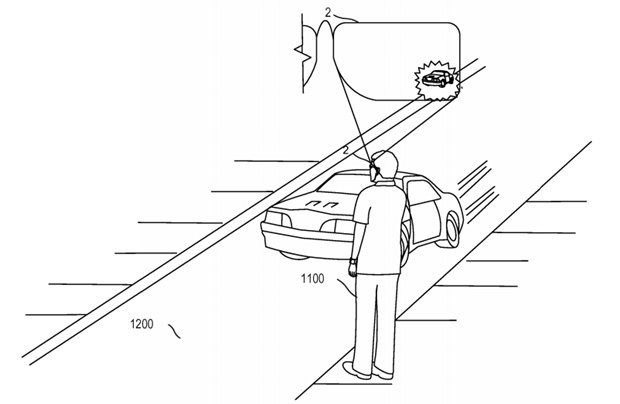 Is this the upcoming HTC Android Wear smart watch?

It could be, but the watch definitely won't have that custom screen, since Google won't allow its OEM partners to...