The LG G3 is one hell of an Android device, boasting a Snapdragon 801 processor, 3GB of RAM and a 5.5 inch Quad HD display. With specs like these, Apple will certainly find themselves in trouble by the time the iPhone 6 lands in the fall. With the G3, LG has taken the guts of a current smartphone and stuffed them into a futuristic housing. LG has perfected the Android smartphone, and that’s an amazing feat.

The LG G3 was and continues to be a smash hit in Korea, selling like hotcakes in LG’s home country, and has been one of the best reviewed Android devices in the U.S. The G3 has been available in the states for a few weeks now, and we’ve got our hands on the Verizon variant of LG’s amazing smartphone.  We’ve already reviewed the Korean unit, and now its time to check out the Verizon version.

While I used the Korean G3 quite heavily, the unit lacked cellular connectivity which prohibited its use as the go-to daily driver. After using the Verizon version as my primary phone for the last week, I’m delighted to report that the G3 is even more impressive than I had previously thought.

Simply put, I’m in love with the G3. Will you fall head over heels for the G3’s floating arcs and laser beams? Read on to find out! 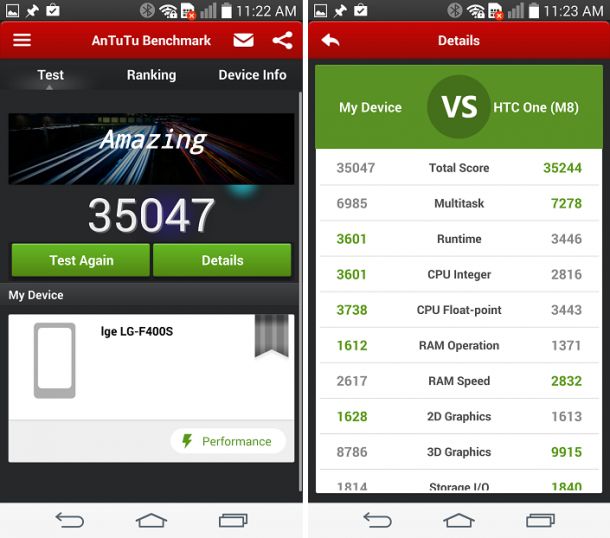 Saying that the G3 packs a punch is a bit of an understatement. On par with the Samsung Galaxy S5 and just a tad below the HTC One M8 in the performance department, the G3 quickly whizzes through apps and anything you can throw at it. The G3 packs 3GB of RAM, a Snapdragon 801 processor clocked at 2.5GHz, a 3,000mAh battery, 13MP rear-facing camera with OIS+ and laser auto focus and runs on Android 4.4.2 KitKat. The G3 comes with 32GB of internal storage which can be expanded up to 128GB via an included microSD card slot. The G3 boasts NFC, WiFi 802.11 a/b/g/n/ac, Bluetooth 4.0 LE and a 1 watt speaker placed on the rear. 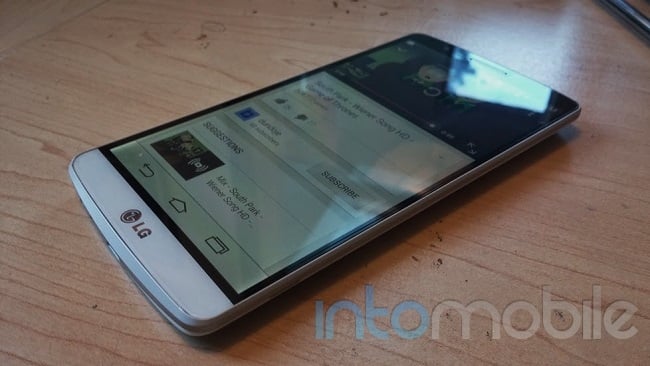 The G3 follows the same design aesthetics of the G2, with minimal bezels and a slightly curved backside – or “floating arc” as LG calls it – which makes for a great feel when holding the device in the hand. Yes, the G3 is a large device, but it can be operated with one hand without any fear of slippage. Weighing in at 149.8 grams, the G3 feels light for such a huge device, and is quite a bit lighter than the G2. The G3 features a polished metallic backside, a departure from the G2’s plasticky back. While the G3’s backside is not all aluminum like the M8, it helps add a sense of durability to the device, and helps keep the G3 from scratches and bumps. That’s a good move on LG’s part, as the back of the G2 picks up tiny scratches like nobody’s business. You’re still going to want to buy a case for the G3 though, as a direct drop will most certainly ding up the edges. And besides, who’d want to scuff up such a pretty screen? 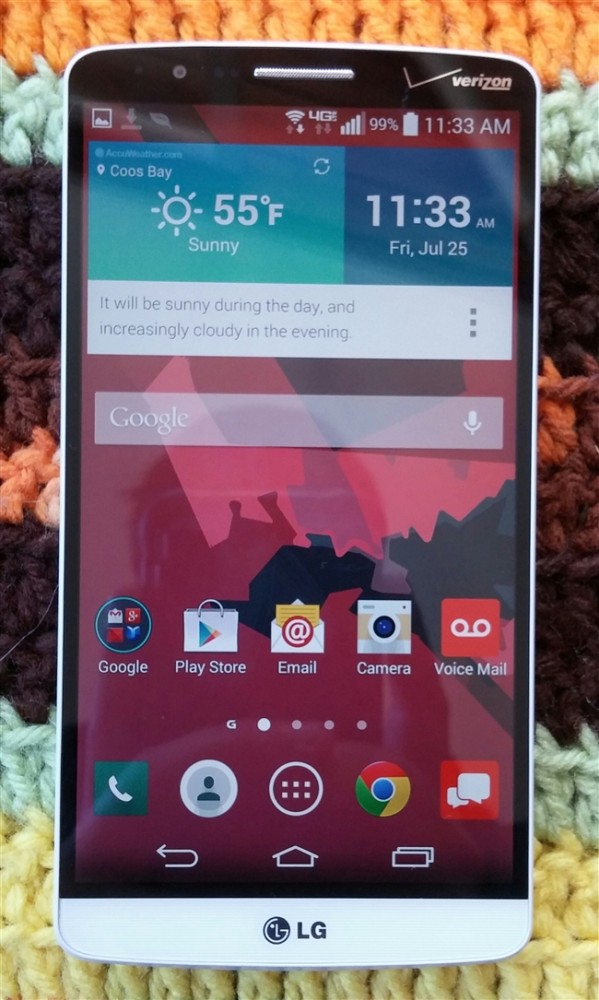 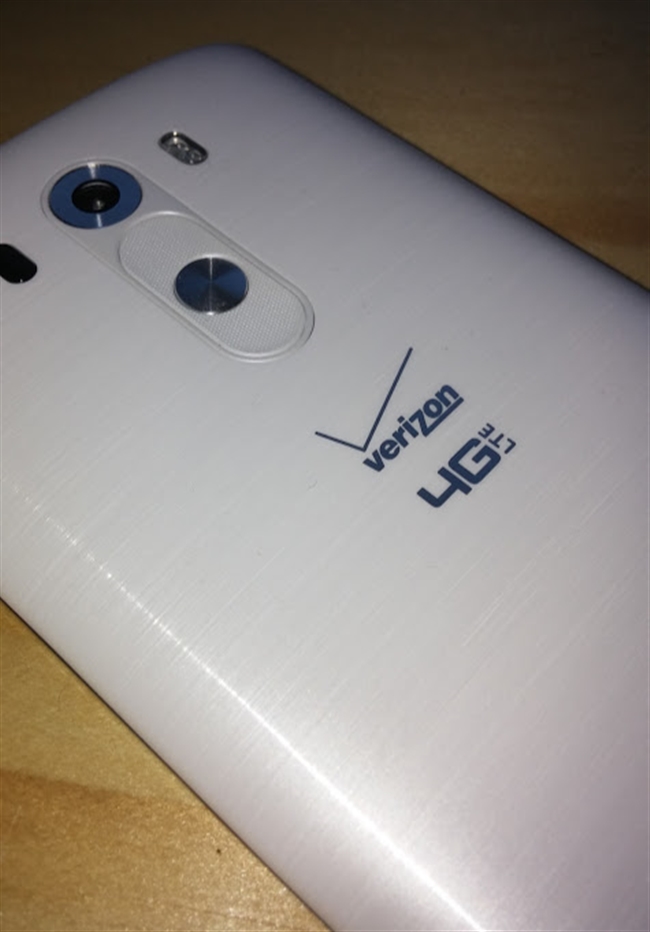 The G3’s back panel can be popped off, revealing the SIM card tray, microSD card slot and a removable battery. Taking the back panel off is a cinch, but does require a little muscle. Rear buttons ala the G2 and G Flex show up on the rear, sporting a slightly recessed disposition. It’s a little touch, but one that pays off in spades. The recessed buttons ultimately make for a more comfortable fit in the hand, and doesn’t feel awkward like the G2’s rear buttons do. 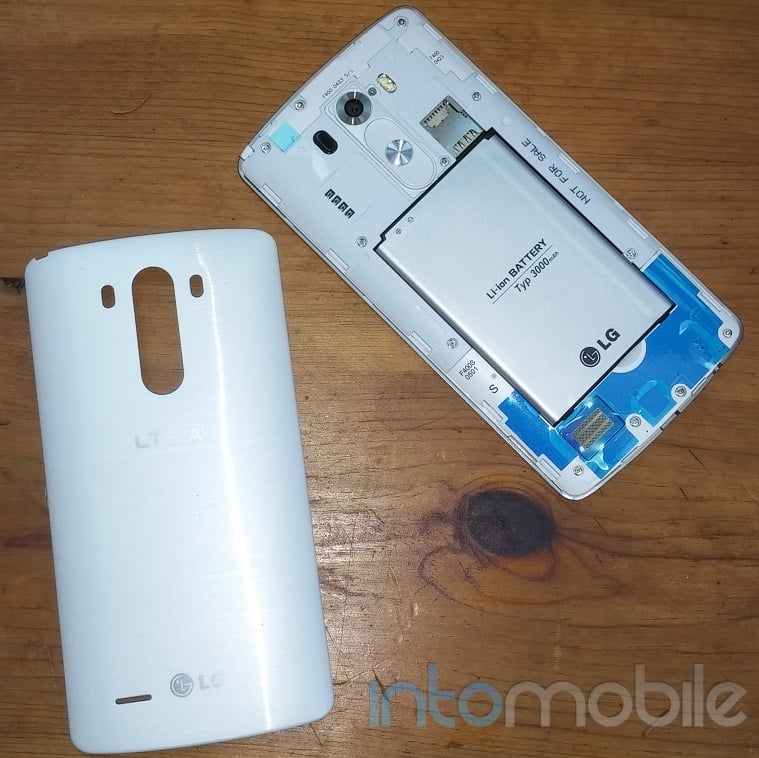 Aside from the display, the G3’s camera is easily one of the devices best features. The 13 megapixel OIS+ rear-facing camera is hands down the best I’ve used so far on any smartphone, blowing the GS5, HTC One M8 and Nokia Lumia Icon out of the water. Pictures come out clear and crisp, giving colors just enough pop to look sharp and not blur out like most other smartphone cameras do. The G3 takes amazing nighttime shots even without the flash, and features a laser to help auto focus pictures. While laser auto focus may sound like a gimmick, it’s anything but; just snap one pic with the G3 and you’ll be drooling all over LG’s new Android device. 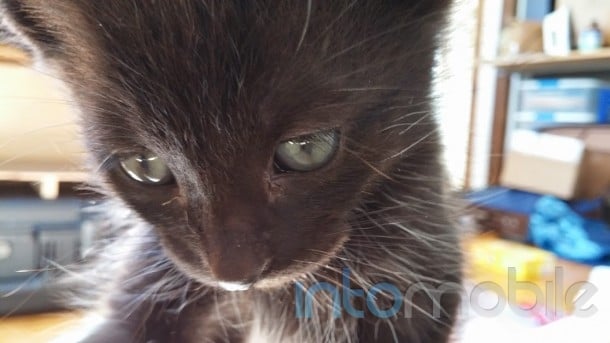 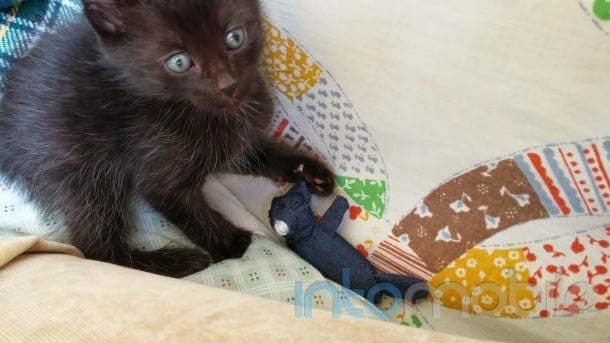 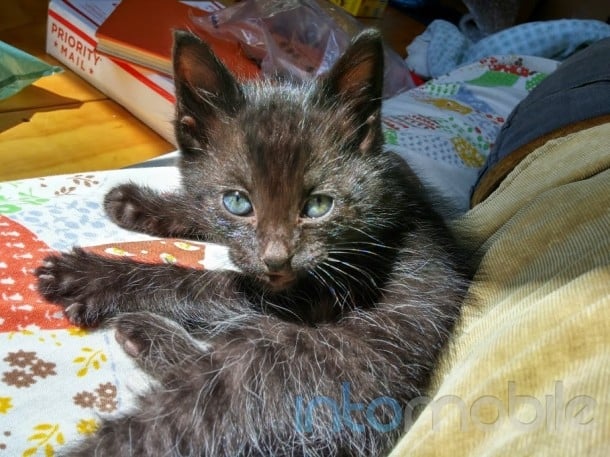 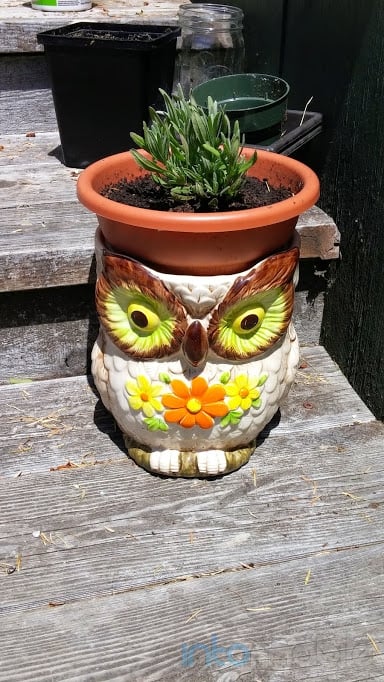 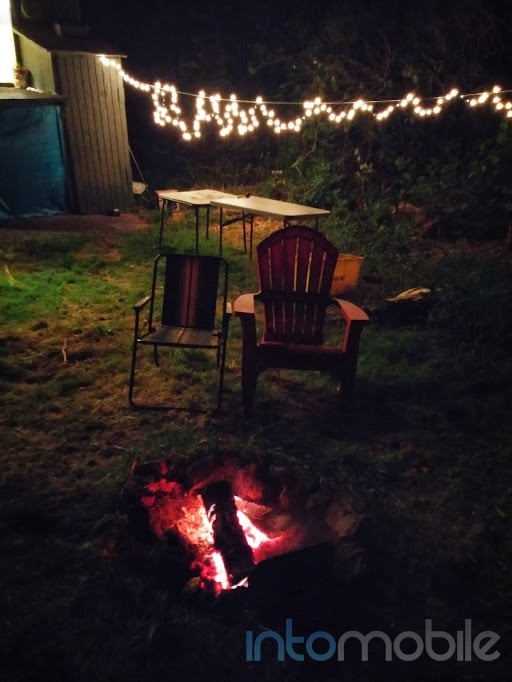 Gesture controls play a huge part in the G3’s camera. Switching cameras is super easy thanks to the ability to swipe up or down in the camera app, and selfies can be snapped by holing up your hand and making a fist. Once the camera detects your fist, it starts a three-second timer, giving you some time to pose for your big moment. Speaking of selfies, the G3 will brighten up your shot with a soft light, single-handedly ending the era of dark and blurred out profile pics. The front-facing camera only packs 2.1MP, but pictures come out clear and lack pixelation which happens all too often when using a front-facing camera. The G3’s camera also boasts a tap to shoot feature, a simplified camera viewing area which rids your screen of those pesky camera setting icons when taking a picture. 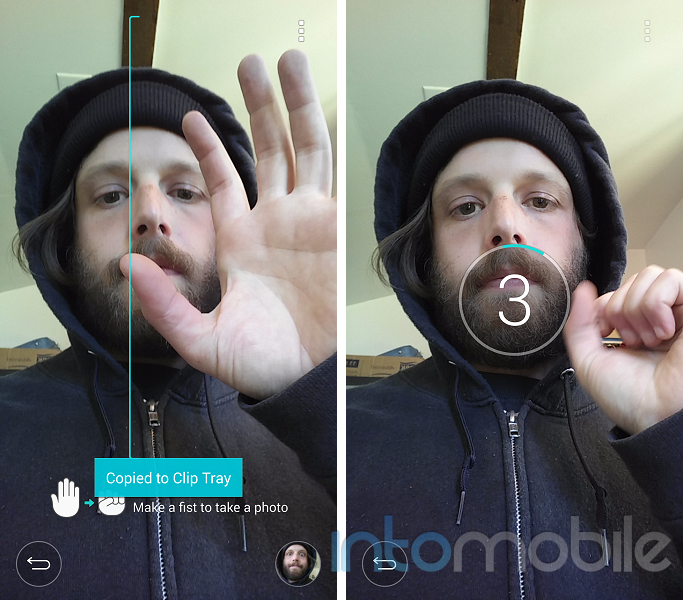 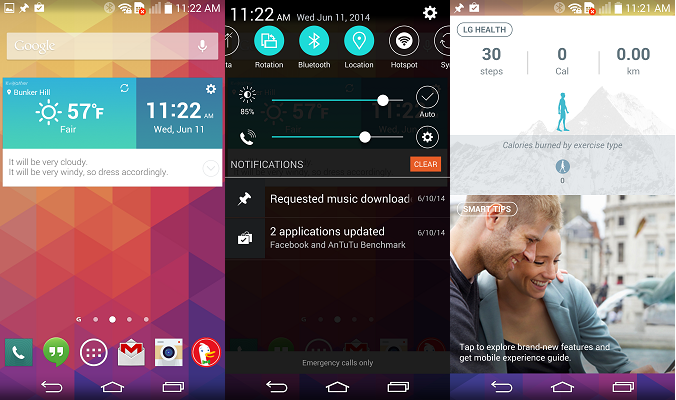 One thing you’ll notice about the Verizon G3 is the lack of bloatware. For the first time ever, Verizon is giving G3 owners the option of uninstalling any crappy bloatware they see fit. This is monumental, considering that up until this point apps pre-installed on devices by Verizon could’t be uninstalled, but could be disabled. That leads to a messy app drawer and extra battery drain if you’re not careful, all things that ultimately make your device feel cluttered and bulky. This feature keeps the G3’s interface simple and smooth which clearly is one of the G3’s selling points.

The LG G3 runs on Android 4.4.2 KitKat, although you wouldn’t think so given LG’s redesigned UI. While that’s usually a bad sign, it’s quite the contrary on the G3. LG’s customizations are actually welcome here, bringing a light and airy feel to the G3. LG managed to pack its proprietary features into the G3 without any sacrifice to screen space or performance. As you’d expect, KnockON, and KnockCode are included in the G3, as well as a smart keyboard and a new feature called SmartNotice which is basically LG’s answer to Google Now. While it doesn’t boast as many features as Google Now, it signals the beginning of a personal assistant for LG devices that can only get better with time. SmartNotice can be accessed by navigating to the left-most home screen window. 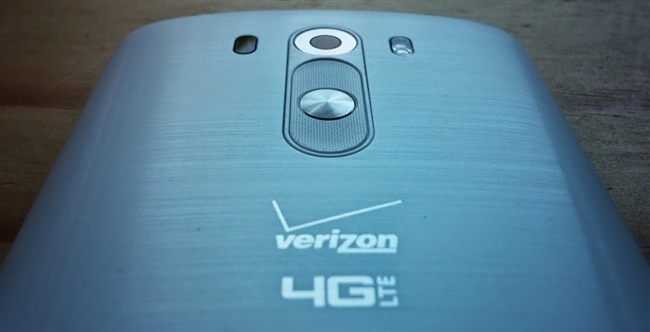 The LG G3 is clearly one of the best Android devices of 2014, but do you need to run out and buy one? That depends. If you’ve got a Galaxy S4, HTC One M7 ot the LG G2, I’d say wait on purchasing the G3. While the G3 is an amazing device, it doesn’t pack enough of an improvement in specs or design to make me throw my G2 to the dogs and spend a buttload of money on a new handset. 2013’s flagship smartphones are still performing quite well, and can be purchased for cheap now, off-contract even. But if you’re absolutely in the mood to buy a flagship smartphone from 2014, the LG G3 is a must have.