IFA has just barely begun, and already Sony has stolen the show. A plethora of Xperia branded devices have been announced, and they’re all looking sexy as hell, as per usual. The new Xperia devices aren’t just another rehash of Sony’s flagship Android device line; Sony’s made sure to pack some amazing new features into the new Xperia line of devices. As far as smartphones go, the Xperia Z3, Z3 Compact and E3 are on the menu this morning. Let’s have a taste of Sony’s new Android offerings, shall we?

The Xperia Z3 and Z3 Compact are built to shock and awe, while the Xperia E3 is more of an “aww.” In a surprising move, Sony’s Xperia Z3 and Xperia Z3 Compact share practically the same spec sheet, and only deviate when it comes to screen size and amount of RAM. Sony’s new strategy gives those who lust after an Xperia Z3 the option of having a powerhouse device with either a 5.2 or 4.6 inch form factor with just a little bit less memory. The Xperia E3 is what would typically be considered a “mini” version of the flagship, coming in with a smaller screen size and a more modest spec sheet. All models share the same design which is elegant yet all too familiar to Sony fans. 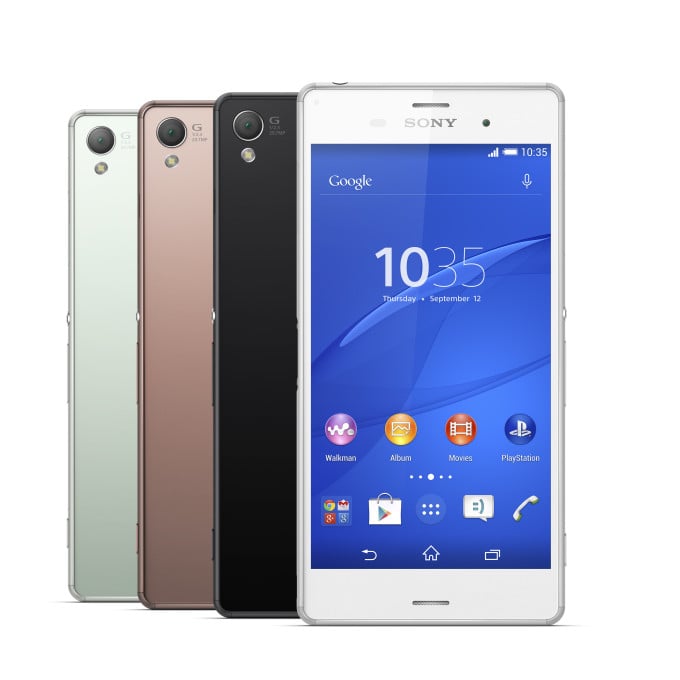 Packed into the Xperia Z3 and Z3 Compact is a Snapdragon 801 processor clocked at 2.5GHz, a 20.7MP camera, 3GB of RAM, 16 or 32GB of internal storage expandable up to 128GB, Android 4.4.4 KitKat, and Sony’s TRILLUMINOS displays. The Xperia Z3 touts a 5.2 inch FullHD display while the Z3 Compact touts a 720p HD display. Both devices have NFC and are fully waterproof (IP 65/68 rating) and include Sony’s Cyber-shot and Handycam technologies to improve the camera experience. 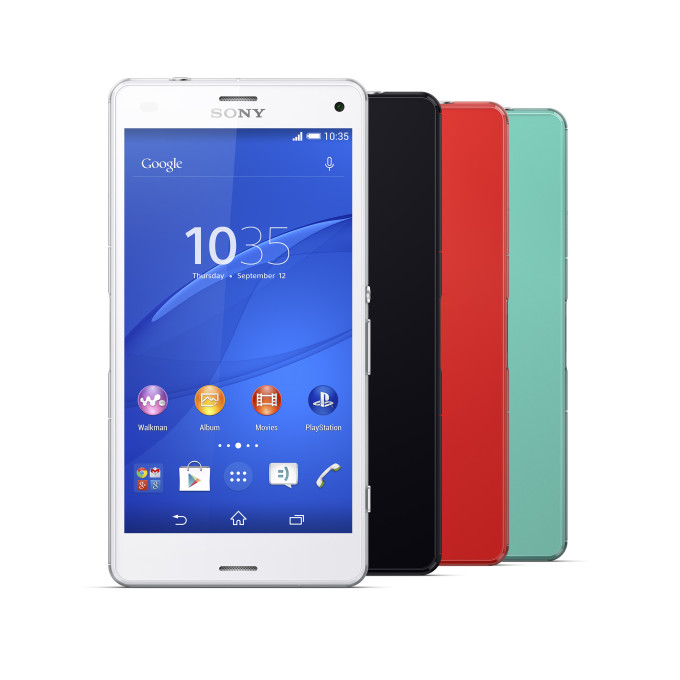 Speaking of Sony technology that is packed into the Z3 and Z3 Compact, Sony has made sure to please both gamers and audiophiles with some of its software magic. The devices will include Hi-Resolution Audio and will allow PS4 owners to play their PS4 games right on their Xperia Z3 or Z3 Compact via the PlayStation App. Just connect your Xperia device to your PS4 and you’ll be able to use your DualShock 4 controller to play your game right on your Xperia Z3 device. 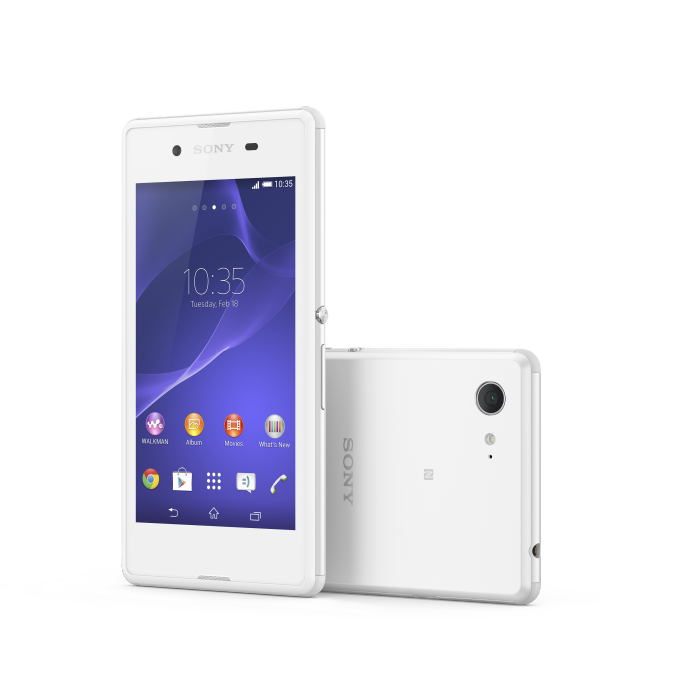 Last but not least is the Xperia E3 the little guy rocks Android 4.4 and houses a modest 1.2GHz Qualcomm Snapdragon 400, a 4.5 inch screen with a resolution of 853×480 pixels, 1GB of RAM and a 5MP rear-facing camera and a 2,330mAh battery. The E3 will come with multiple color options which include black, white, lime and copper.

The Xperia Z3 and Z3 Compact will be hitting the U.S. online and from T-Mobile stores this fall. The Xperia E3 will arrive this fall as well, although carriers have not yet been detailed.

Check out Sony’s press release below for more information.

Unrivalled battery stamina, the best camera and camcorder and PS4™ Remote Play for the first time, all with the highest waterproofing rating available in a choice of two sizes

“At Sony Mobile, ‘flagship’ now means offering a choice to consumers of enjoying a large screen Xperia Z3 for immersive entertainment or a more compact, lighter Xperia Z3 Compact that doesn’t ask you to compromise on features,” says Kunimasa Suzuki, President & CEO, Sony Mobile Communications. “Consumers demand and deserve greatness from their smartphone – in design, camera and battery life. That’s precisely what we aim to deliver with Xperia Z3 and Xperia Z3 Compact, at the same time as delivering leading innovations such as unique Sony camera experiences and, for the first time, PS4 Remote Play in two beautifully designed, fully waterproof smartphones.”

A fusion of engineering and design

Xperia Z3 blends design and engineering craftsmanship to deliver beauty that will stand the test of time. Its 7.3mm super-slim rounded aluminium frame and durable tempered glass panels showcases superior craftsmanship that is available in your choice of a new range of colours including white, black, copper or silver green . At just 152 grams with an easy-to-use interface and symmetrical design, it feels right at home in your hand.

For those who prefer a compact smartphone, Xperia Z3 Compact’s rounded liquid reflection frame with tempered glass panels gives it and elegant, premium finish. The only smartphone to deliver uncompromised performance in a beautifully compact design that is just 8.6mm thick and 129 grams, Xperia Z3 Compact’s design is perfect for one-handed use. Enjoy bold style with Xperia Z3 Compact’s unique colour range including orange and green, in addition to the classic white and black.

Delivering the highest waterproof rating, both are fully waterproof3 (IP 65/68), so you can take your Xperia Z3 or Xperia Z3 Compact with you wherever you go – whether you’re answering a call in the rain or taking pictures in the pool.

Plus, there’s no need to worry about your smartphone being ready when you are – with optimal battery performance, Xperia Z3 and Xperia Z3 Compact push the capabilities of power to give you a long-lasting battery life of up to two days4. Or, get even more from your battery with Sony’s Battery STAMINA Mode, which turns off background functions when you’re not using them to help extend your battery life.

The world’s best camera and camcorder in a smartphone

Capture the moments that matter in the highest quality with stunning detail – anytime, anywhere. Drawing on years of expertise from Sony’s award-winning Cyber-shot™ and Handycam™ technologies, Xperia Z3 and Xperia Z3 Compact deliver superior image quality whether it’s in low-light, on the move or even underwater.

The 1/2.3” ExmorRS™ for mobile sensor and BIONZ™ for mobile processing engine work together to give you photos and videos in sharp and vivid detail. Plus, you can fit more into every shot with the new 25mm wide-angle Sony G Lens. If you’re capturing a photo of a stunning sunset, take advantage of the world’s first ISO 12800 sensitivity in a smartphone5 for better detail, even in low light.

Shooting a video? Sony’s new and improved SteadyShot™ technology with Intelligent Active Mode compensates for your movements, analysing dozens of backwards and forward frames, to predict your next steps and make panning smoother and images more stable.

For those most important memories, record clips in super-clear 4K resolution at four times Full HD. Plus, the advanced video mode on Xperia Z3 and Xperia Z3 Compact means you can pause and resume filming, so you can be sure to capture the perfect moment in one file.

New social camera apps and editing features will take your camera experience to the next level. Capture an event and your reaction to it at the same time with Face in. Add scribbles and animations to pictures with AR fun. Create a movie from your photos and videos with Movie creator. Record from multiple angles with up to three compatible Xperia devices filming at the same time with Multi-camera. Or add sound to a photo with Sound Photo.

All of these new camera apps are added to a wide range of popular Xperia camera apps accessible directly from your camera’s viewfinder, including Background defocus, Live on YouTube – by Xperia™ and Timeshift video.

Tune in with an audio powerhouse

The mobile music experience just got re-invented. Sony’s rich audio expertise comes through in every beat with incredible High-Resolution Audio, so you can hear every track just as the artist intended when using Hi-Res Audio headphones such as Sony’s new MDR-1A range. For those tracks that aren’t in Hi-Res quality, Sony’s ground-breaking DSEE HX technology – available now for the first time in our Z3 series – ‘upscales’ the fidelity of your MP3 or AAC music collection as well as your playlists on Sony’s cloud-based digital music service, Music Unlimited8, to near High-Resolution quality.

The front-facing stereo speakers with S-Force Front Surround™ play everything loud and crystal clear for those moments when you want to set your sounds free.

Unrivalled entertainment with the only smartphones with PS4™ Remote Play2

Sony has engineered a revolution in gaming technology with the addition of PS4™ Remote Play on the Xperia Z3 series. The only smartphones with PS4 Remote Play, you can now use your Xperia Z3 or Xperia Z3 Compact as a remote screen to connect to and control your games on PS4. For those times when the TV is being used, simply connect your Xperia smartphone to your PS4 via home Wi-Fi and use the DUALSHOCK®4 Wireless Controller with the GCM10 Game Control Mount to continue playing games anywhere at home on Xperia Z3 and Xperia Z3 Compact.

Additionally, the PlayStation®App lets you use your Xperia Z3 or Xperia Z3 Compact as a second screen to remotely watch the game play of your friends, communicate with PSN™ friends, or purchase PS4 games and download to PS4.

Whether you’re playing a game or watching a movie, your entertainment is enhanced with Sony’s latest TV technologies. With an ultra-bright display, both smartphones deliver a visual brilliance for a truly great entertainment experience. Combined with Sony’s TRILUMINOS™ Display for mobile with Live Colour LED, X-Reality for mobile and intuitive contrast enhancement, both Xperia Z3’s 5.2” Full HD display and the 4.6” 720p HD display on Xperia Z3 Compact are sharp and vivid even in bright sunlight.

Switching to Sony has never been easier. Just open up the Xperia Transfer Mobile app and a few simple actions later, all of your existing music, photos, contacts and more from your old Android, iOS or Windows smartphone will be ready and waiting for you on your new Xperia.

With NFC compatibility it’s even easier to connect devices and share with more than 160 Sony One-touch enabled products – such as headphones, TVs and SmartWear including the new SmartBand Talk SWR30.

Bringing Your Own Device to work? It couldn’t be easier. Work from anywhere with the advanced Xperia Email, Calendar and Contacts apps, which can be synced using Microsoft® Exchange ActiveSync® (EAS) and use your favourite business apps from the Android community. And for those switching between work and play, Xperia Z3 is also available in a Dual SIM variant in select markets so you keep both accounts running in one sleek smartphone.

Samsung's Unpacked event is underway, and it just keeps getting juicier. As expected, Sammy has just announced the Galaxy Note...