If buying a LG G3 wasn’t awesome enough, LG is sweetening the deal with a powerful promotion. Customers who purchase a LG G3 from today until September 22nd will receive an 3,000mAh extra battery and a charging dock for free. The G3 does have decent battery life, but it’s quad HD screen will suck down the juice if you’re doing a lot of Netflix bingeing or the like. Having an extra battery is always a good thing, whether you end up needing it or not.

The promotion applies to G3s purchased directly from any major U.S. carrier online or in-store, as well as authorized retailers such as Amazon and Best Buy.

You won’t be receiving your free perks right away, though. You’ll have to head to LGG3promo.com and submit a proof of purchase form, which shouldn’t be that hard to do. Submissions must be received by October 6, 2014, and your free gifts will arrive 4 to 6 weeks after your application has been accepted. 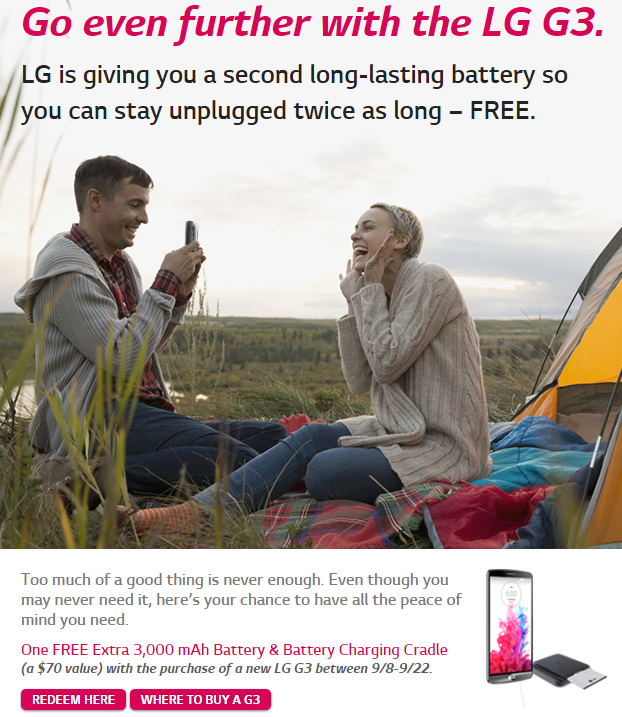 ENGLEWOOD CLIFFS, NJ, Sept. 9, 2014 – LG Electronics today announced it will be giving customers the chance to easily double the usage time they get out of their LG G3 smartphone in between charges. Beginning today, through September 22, 2014, anyone who purchases an LG G3 during this promotional period will receive a free extra battery and battery-charging cradle, valued at approximately $70 (USD). So now, not only will customers have the leading flagship smartphone, which already boasts one of the industry’s longest battery life, they can easily open up their LG G3 and pop in a fresh battery whenever they want.

The recently released LG G3 has already been touted by the media and fans as the perfect smartphone. It builds upon the heritage of the premium G smartphone series – packing the first 5.5-inch Quad HD display in the United States; refined and intuitive design and user experience; and a captivating 13-megapixel camera including OIS+ technology with Laser Autofocus.

“The overwhelming response for the new LG G3 speaks for itself. We’ve received praise from some of the industry’s toughest reviewers and from consumers all around the world,” said Chang Ma, senior vice president of North American marketing, LG MobileComm. “With this battery promotion, we are highlighting our superior performance and incentivizing those consumers that want that extra peace of mind, even if they never need it. They will now have twice as much time to spend on their adventures with their LG G3 before they have to even worry about looking for an outlet.”

The limited time offer will be open to those who purchase an LG G3 device via any carrier or authorized retailer. To learn more, please visit: www.LGG3promo.com.

Google has introduced voice calling to the Google Hangouts app, much to the delight of Android users everywhere. Google began...