There’s no doubt that the Moto 360 has been the most anticipated Android Wear device, ever. When Motorola showed the world its round-faced smartwatch, Android enthusiasts fell in love with the beautifully designed smartwatch. Android Wear offerings so far have been square-faced 7548plastic banded novelties with a serious lack of flare. With Motorola’s penchant for design and build quality, the Moto 360 looks to elevate the Android Wear platform from playtime to primetime. Part watch, part fitness tracker and all gorgeous, the Moto 360 is the crown jewel of the Android Wear ecosystem.

With the Apple Watch and numerous other Android Wear devices slated to hit the market soon, does the Moto 360 have what it takes to stand out in the burgeoning wearable crowd? Read on to find out! 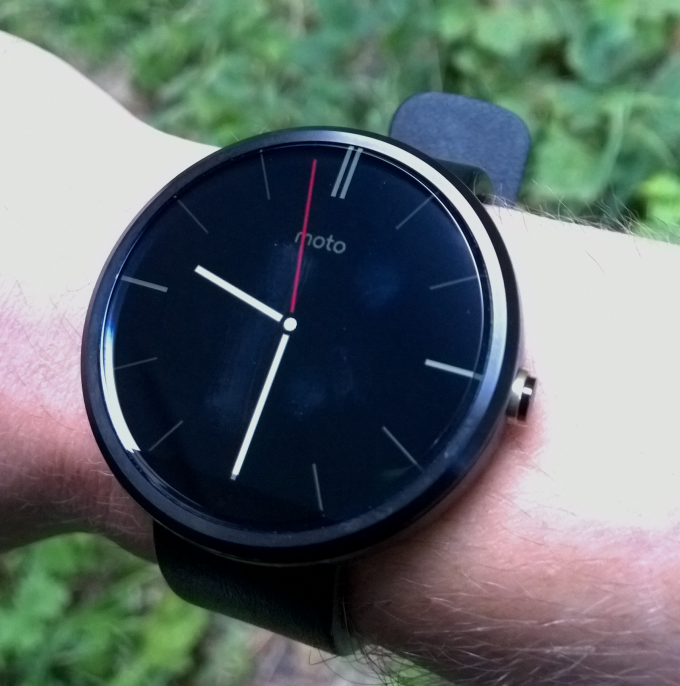 Not too big, but not too small either.

Design wise, the Moto 360 is stunning. It’s all circles, curves and premium materials. The stainless steel body is not only beautiful with a shine of its own but makes the wearer like the Moto 360 is anything but a toy. Running on Android Wear, the Moto 360 rocks a 1.56 inch display with a resolution of 320 x 290 and includes a backlight to ensure that notifications are displayed in a stunning fashion. 4GB of internal storage is included as well as a 320mAh battery which lasts about a day with mid to heavy usage. Tying the package together is a leather band, which can be swapped out for any watch band out there. There will be a variant with a metal band which will run $299, while the leather banded 360 commands a price of $249.

It is IP67 certified, meaning that you can rock your Moto 360 in up to 1 meter of water for 30 minutes. Dings and scratches to the 360’s flawless face are always a concern, but with a layer of Gorilla Glass protecting the device you should be in good shape.

Let’s start out with the most discussed gripe with the Moto 360: battery life. The Moto 360 isn’t really built to get you through the week with a charge but rather a day. Even with Ambient mode turned on, don’t expect to get more than 24 hours out of the Moto 360. This makes relying on the 360 on long trips a bit of a nuisance. The Moto 360 is compatible with any wireless Qi charger however, so if you’ve already got one of those, you’re in good shape. The included charging dock isn’t bad, either; when docked, the 360 charges quickly. 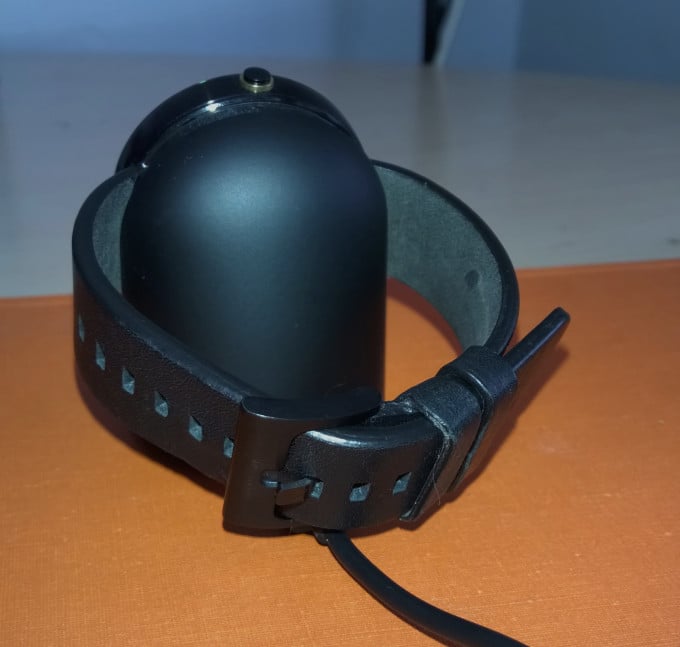 What many aren’t talking about in regards to battery life is how your smartphone is affected. If you want notifications and such to appear on your wrist, you’re going to have to have a constant Bluetooth connection open, which will drain a substantial amount of your smartphone’s battery. If you’ve got a higher end smartphone with a decent battery, it’s not such a big deal. But if you’re scrambling to plug in your smartphone every few hours anyway, using the Moto 360 on the go isn’t the best proposition. The Moto 360 is best suited for short day trips or usage around the house or office. 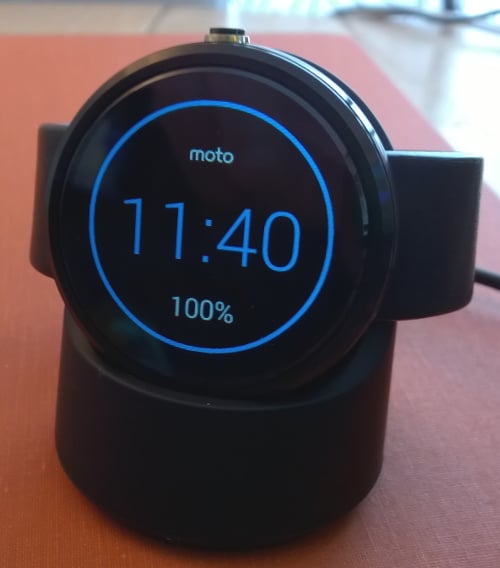 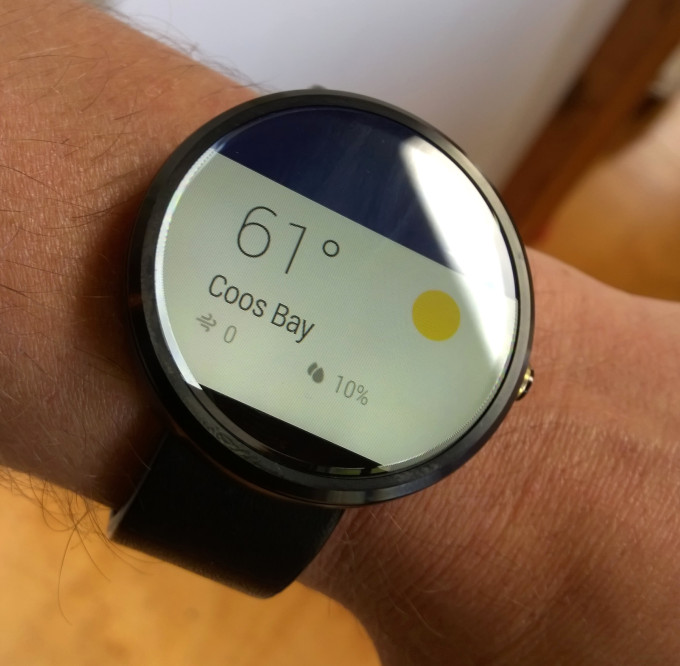 Get ready to talk to your Moto 360. A lot. Most of the functionality of the device comes from its ability to respond to a variety of voice commands. It’s pretty much Google Search with a few caveats. Aside from the bevy of commands that are already standard in Google Search, new voice commands are added when an Android Wear compatible app is installed.

While voice commands are clearly the star of the show with Android Wear, I actually preferred not talking to my wrist. Response to voice commands was spotty, sometimes initiating without fail, other times not responding at all. Personally, I found this lack of consistency annoying. More often than not, I would access the app menu on the watch to initiate features by touch instead of by voice. This isn’t a cakewalk either, since you have to shuffle through a few menus to reach the app list. I’m sure these bugs will be addressed in future versions of Android Wear, which is integral if the platform intends to become popular among the masses.

As with all Android Wear devices, the Moto 360 must be paired via Bluetooth on an Android device running Android 4.3 or up. This allows the Moto 360 to display notifications from the paired device in the form of cards (think Google Now) on the bottom third of the screen when relevant. Swiping the notification card from left to right dismisses it, while swiping the other direction opens up a few options such as opening an app on the phone and quickly replying to a missed text or initiating a call on your smartphone. Responding to a Hangouts message is as easy as hitting the reply button and dictating to your Moto 360, or choosing from a small list of canned responses. When using Google Maps, you’ll be treated to tiny turn-by-turn navigation cards and you can even play, pause and skip songs which are playing in Google Play Music. There are a few more cool things you can do with the Moto 360, but overall the functionality of the wearable is limited.

There is a burgeoning Android Wear compatible app scene out there, but unfortunately, most of the apps and games are tailored to the less elegant and more square Android Wear devices. The apps that do work on the Moto 360 are pretty slick though, and make the little wearable just that more interesting. There’s no speaker on the Moto 360 so you can’t take your calls on it, but you can touch the screen to initiate the call on your smartphone. As far as alarms go however, Motorola’s got you covered; the Moto 360 does include a little vibrator that tickles your wrist if you want it to. Swiping down from the top of the watch face allows you to mute or activate vibrating notifications. 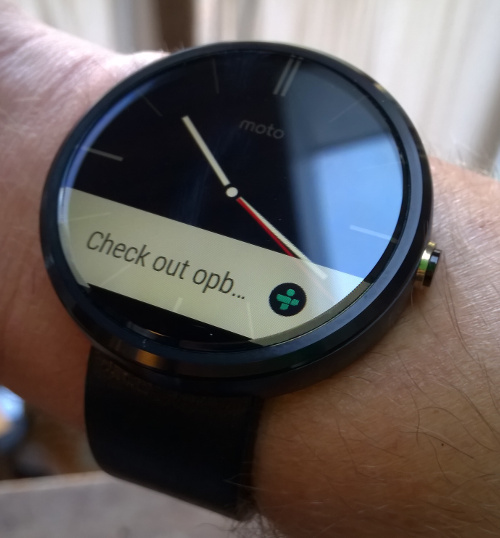 Think of the Bluetooth connection as the Moto 360’s lifeline – as a standalone device, the Moto 360 doesn’t really do much, aside from being a flashy and stylish looking piece of swag and a quasi-fitness device. I encountered mixed results with the built-in heart rate sensor, which doesn’t like to work if you’re moving your arm at all. It’s also got to be pretty flush with your skin, so if you tend to let you watch flap around a bit on your wrist like me, you’re not going to be getting much heart rate data. You can opt to check up on your heart whenever you’d like, and the 360 takes readings at random times throughout the day as well. The pedometer is handy though, and syncs up with Motorola’s Fit software which tracks your daily workout goals.

The Moto 360 did occasionally disconnect from my phone though, but I suspect this is a flaw in Android Wear and not the Moto 360 itself. Not a huge deal, either, just slightly annoying and shows the overall state of Android Wear at the moment. There’s no doubt that the platform will grow, and perhaps flourish, but it’s going to take time. Just as it took Android a few years to really get going, Android Wear is going to need a little time until it can spread its wings and fly.

After a few weeks with the Moto 360, it’s safe to say that the Moto 360 just isn’t ready for the prime time. It’s a little buggy, what you can actually do with the wearable is limited, and the battery doesn’t last long enough for it to be truly considered anything more than an accessory.

So should you buy the Moto 360? Well, that depends. If you love having the latest gadgets and money isn’t a huge issue, go for it. If you’re looking for a fitness tracking device, then I suggest you check out other wearable fitness trackers which provide more battery life and a slimmer form factor than the Moto 360. If you want a watch, buy a watch. If you’re wanting an Apple Watch, well…have fun with that one.

For Android and technology enthusiasts with a little cash to burn, the Moto 360 is just what you’ve been waiting for. And it’s only going to get better from here.

Vivo Xplay 5 will be the first Snapdragon 810-powered phone?

Chinese tech analyst Pan Jiutang claims that Vivo will be the first vendor to launch a smartphone powered by Qualcomm's...