Way back in 2013, Motorola threw everyone a curve ball with the launch of the budget-minded Moto G. The device didn’t fare so well here in the U.S. but was a smash hit in Brazil, India and other emerging markets around the world. No, the Moto G didn’t offer the most blazing fast specs or crazy quad HD screen – it packed hardware which was ‘good enough’ – fast enough to handle everything Android 4.4.4 KitKat could throw at it and look good in the process, all for under $200 off-contract. Now its 2014 and the Moto G is back and badder than ever, sporting a slightly bigger screen and a few improvement s over its 2013 counterpart. Overall, the new Moto G is basically the 2013 model with a few tweaks. That’s not a bad thing as the 2013 Moto G was clearly a winner, and the 2014 version is poised to become a success as well.

Let’s take a look at Motorola’s 2014 beautiful budget bombshell, shall we? 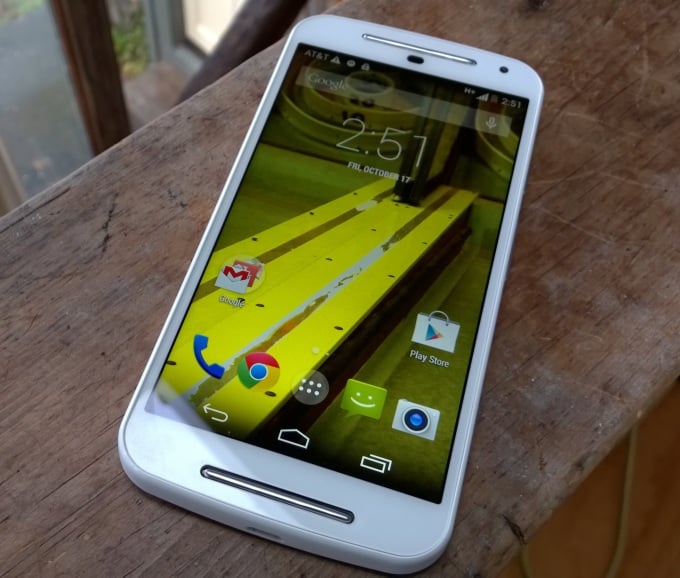 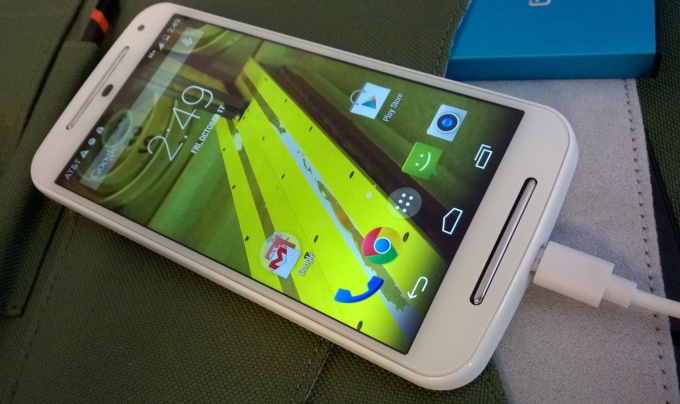 Looking at the Moto G’s spec sheet is a little underwhelming, but that’s not the point here. The Moto G strikes the balance between a low price point and functionality. At the core of the 2014 Moto G is a Qualcomm Snapdragon 400 processor clocked at 1.2Ghz and a Adreno 305 GPU. A 5 inch 720p HD IPS screen with a ppi of 294 and a resolution of 720 x 1280 and is protected by a layer of Corning Gorilla Glass. 8 and 16GB variants are available, and a microSD card slot is on board allowing memory expansion of up to 32GB. An 8MP camera graces the back of the device while a 2MP front-facing selfie snapper takes up the front. Dual SIM models are also available, and Motorola promises that Android 5.0 Lollipop will land on the device as soon as humanly possible. Based on rumors so far, Android Lollipop should make its way to Motorola devices by the end of the year. Android 4.4.4 KitKat does the job with flying colors, but its nice to know that Lollipop will grace the Moto G soon. 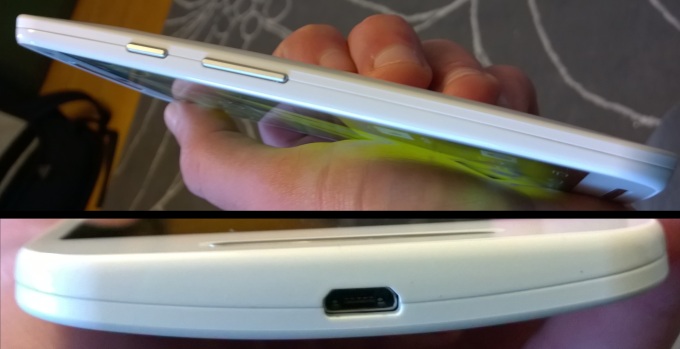 Like the 2014 version of the Moto X, the Moto G rocks front-facing stereo speakers that look cool and sound pretty good. While they’re not on par with HTC’s BoomSound speakers they get the job done, and are a nice surprise on a phone that comes in under $200 outright. A power button and volume rocker take up the right side of the device, with a 3.5mm headphone jack on top and a microUSB charging port on the bottom. You’ll find a snazzy Motorola logo on the back center, with the LED flash and camera residing directly above. The backside is slightly curved like its predecessor which lets the smartphone rest in the hand comfortably. It’s also water-resistant, touting a coating that will protect your device if you get caught in a sudden downpour. Overall the design is sleek and simple which helps the Moto G feel like a premium device. 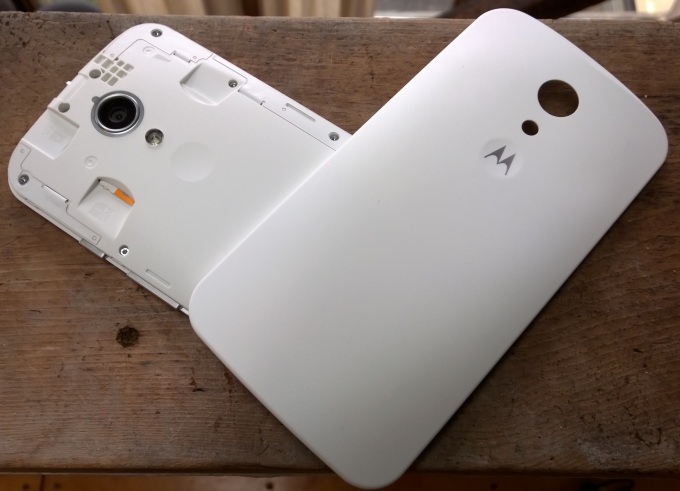 Swappable back covers were a huge deal with the 2013 Moto G, and Motorola has kept that tradition going with the 2014 version. The plastic back snaps off easily, making swapping out colorful backsides a cinch to say the least. Popping off the back allows access to the SIM card slot, or slots if you’ve got the dual SIM version. Sadly, there’s no swappable battery, which would make perfect sense to include since you can pop the back of the phone off already. Sure, the Moto G isn’t a battery leech, but the option to throw in a fresh battery if necessary is always welcome to me. 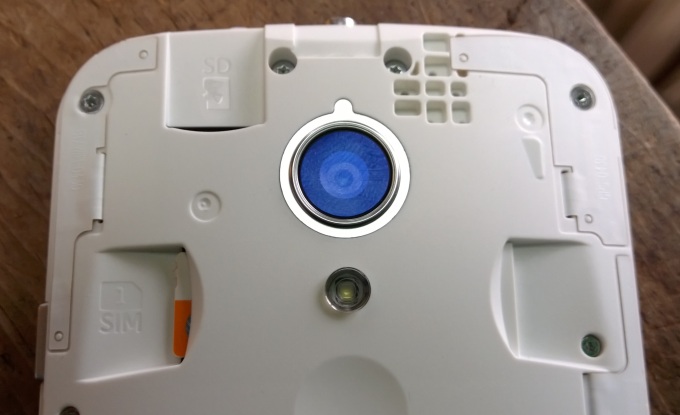 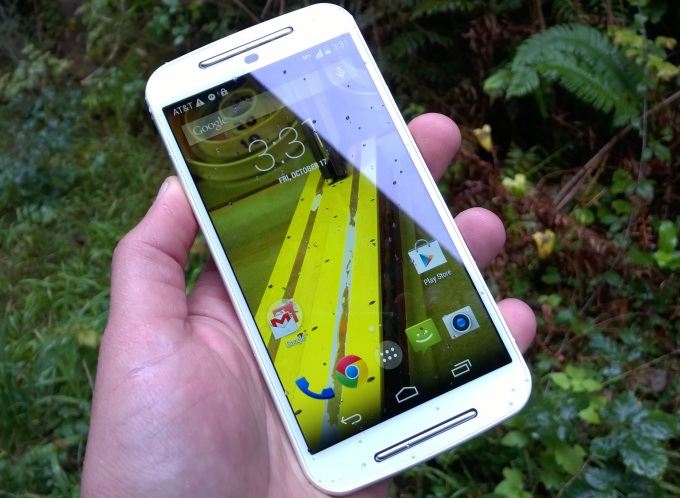 The Moto G’s camera isn’t the most impressive, but with Motorola’s sleek and easy camera interface taking pictures with the Moto G is a breeze. The device’s 8MP rear-facing camera captures 720p video at 30fps, while the modest 2MP front-facing camera can capture some Instagram quality selfies with a snap.

Firing up the camera app for the first time is a little confusing, due to the lack of icons usually present in most camera software. Here’s where the Moto G’s camera really shines. To snap a pic, simply touch the screen and bam, you’ve got your shot. If you’re one for zooming, simply swipe up or down to change the zoom amount. Swipe right to display the camera settings, and swipe left for a quick jaunt to the photo gallery. With most flagship Android phones these days rocking at least a 13MP camera, 8MP may seem lackluster, and it kind of is. But for everyday snaps and the occasional selfie, the Moto G’s camera will see you through.

As far as call quality goes, voice calls with the Moto G came in crisp and clear while using AT&T’s network. These days call quality is the least of people’s concerns, but its a welcome thing if you’re one of those people who actually still make voice calls with their smartphones. The huge bummer here is that LTE support isn’t around – a big downside if you’re used to super fast data speeds. The device supports GSM, GPRS, EDGE, UMTS and HSPA+, the latter of which could score you some moderately fast download speeds.

The battery on the Moto G could be a bit bigger. Clocking in at 2,070mAh the battery does provide ample juice to get you through your day. If checking Facebook every few minutes or streaming movies is on the menu, you’re going to need a charge pretty often. Overall though the battery life is fine, but it’s nothing to write home about. I was able to squeeze out around 12 and a half hours of battery life out of the Moto G after a day of moderate usage. 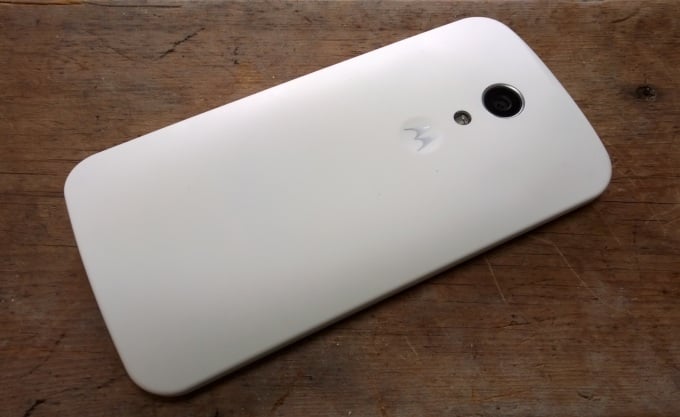 The Moto G isn’t really that much different from the 2013 model, but that’s not a bad thing. Motorola has replicated last year’s success with the 2014 model, proving that the company has finally accomplished the mission it laid out with the 2013 Moto line: strike the perfect balance between price, functionality and design. While the 2013 Moto X was supposed to be the poster child of that mission, it fell short in many ways, namely in the realm of pricing. That crown now goes to the 2014 Moto G, a semi-powerful bloatware free Android device for under $200.

If you’re in the market for a new smartphone and don’t want to break the bank, the 2014 Moto G is for you. It’s not going to please those who are used to the latest bells and whistles. But if good enough is your thing, the Moto G is definitely worth a look. It may not look like much, but the Moto G is a delightfully simple device with an even more delightful pricetag.