When it comes to making a new smartphone purchase, many people flock to the most shiny and high-performing handsets, such as the HTC One or the Samsung Galaxy S4. While these flagship devices provide amazing performance and style, many of us can’t afford to drop $200+ to upgrade our devices. That’s where Sprint’s LG Optimus F3 comes in, offering a rich feature set in a mid-range Android device that won’t break the bank.

The Optimus F3 comes in at the bottom of LG’s mid-range Optimus F-series handsets, with its bigger siblings the F5 and F7 rounding out the affordable smartphone line. LG has nailed the balance between performance and cost with the F3, packing a 4.0-inch screen and Android 4.1.2 Jelly Bean into the little silver device. Priced at just $29.99 with a two-year contract or $249.99 outright and running on Sprint’s 4G LTE network, this smartphone delivers a solid user experience. Did I mention the battery lasts forever? Because it does.

So why is the LG Optimus F3 the bargain of the year? Let’s find out.

The Optimus F3 is packed with a 1.2GHz dual-core Qualcomm Snapdragon 400 processor, a 4.0-inch IPS 800 x 480p display, 1.24GB of internal memory and a gargantuan 2,460mAh battery.  Wi-Fi 802.11 b/g/n support is included, allowing the device to take advantage of fast and robust Wi-Fi protocols. The Android 4.1.2 powered handset comes with a few features which are usually lacking in mid-range handsets, namely  face recognition for face unlock, and eye-blink detection, which keeps the device's screen from going dark while a user is focused on the screen. The Qualcomm Enhanced Location Service speeds up the GPS location process, and delivered location results at a much faster clip than other smartphones I've encountered. While 1.24GB is a small amount of internal memory, the device does have a microSD card which allows memory expansion of up to 32GB. After putting a 32GB microSD card into the Optimus F3, the small amount of internal storage quickly became a non-issue. 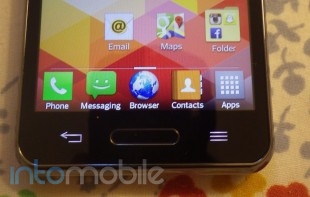 With dimensions of 4.57 by 2.44 by .4 inches and a weight of four ounces, this stubby little guy won't be slipping out of your hands anytime soon. The F3 has some heft to it when compared to handsets with a slimmer design, but feels comfortable and not overbearing.

The Optimus F3 resembles other Optimus devices, with a brick like shape and an ovular physical home button wedged between the capacitive back and menu buttons. The thick plastic back panel sports a pinstripe design, which not only gives the F3 some swagger but provides surety against slippage. A thin chrome bezel adorns the top edges of the device, with a small speaker slot located just above the LG logo on the front. LG's design elements are striking, and make the build of the F3 surprisingly robust considering the low price point.

Overall, the user interface doesn't deviate too much from other Android devices running on Android 4.1.2 but does have a few nice surprises. LG has added some of its own software in as well, such as QSlide, which places an app bar in the notification panel, enabling easy access to apps such as the web browser, memo pad, calendar calculator and the Videos folder. QSlide allows the aforementioned apps to be opened in their own windows which float over the homescreen, allowing for multitasking. The transparency of the QSlide window can be quickly changed via a slider bar for easy access to other apps.

There's also a file manager and a language translation app, and an app called Sprint ID that allows users to customize ringtones and wallpapers. 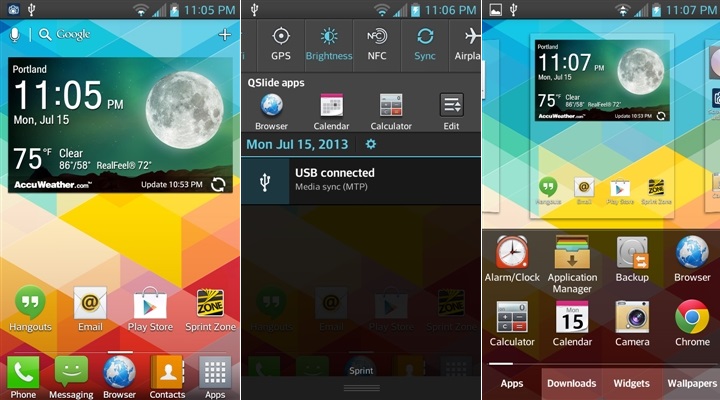 LG's Optimus skin runs on top of Android 4.1.2 Jelly Bean, providing a user experience that is surprisingly fast. Usually I'm not a huge fan of skins as they usually big down the processor, but LG's offering provides snappy scrolling and app drawer access with no problems.

The Optimus F3 comes with a 5MP rear-facing camera and a 0.3MP VGA camera on the front. While both of the cameras are nothing to write home about, the front-facing camera does provide clear pictures when snapping photos in illuminated situations. Most pictures come out a little dark, and tend to blur when light is limited. For a budget smartphone, a camera of this quality is pretty standard, and is still good enough to keep snapping those Instagram pictures.

Video is fine when shooting in 720p, but suffers from the same perils as taking still photos does, namely washed out colors and blurred images. The camera seems to take a while to adjust when moving from a light area to dark and vice-versa, creating a strange dimming effect that lasts a few seconds long. 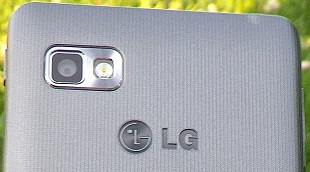 As for multimedia apps, the F3 comes pre-loaded with all of the Google favorites, such as Google Music, Google Play Movies and TV, Play Magazines and Google Play Books. The stock music player app is nothing new, looking and functioning in the same manner as most Android devices. Google Play Music functions well, looking clean and vibrant and streaming music to the F3 with no lags. Audio comes out clear and crisp, although at maximum volume some of the high notes carry a bit of a screeching sound, and the bass could be a little deeper. That was at crazy ear-blowing volume, however; after I turned it down a notch, music quality was perfect.

Calls on the Optimus F3 were clear and crisp, with the noise-cancelling microphone making short work of urban sounds while engaged in a call. The speakerphone functioned quite nicely, coming through clear unlike some speakerphones which make voices sound cloudy and muddy.

The battery life is where the F3 really shines, though. Normally, I turn off the GPS and Wi-Fi on my devices when it is not needed to conserve battery life, but on the F3 that was not necessary. With the 2460mAh battery I was able to leave those features on in the morning, and still have some juice left at the end of the day. The F3 delivered around 6 hours of video streaming, using the Netflix app via Wi-Fi. Even with all of the extraneous features turned on, I was able to get an awesome 15 hours of moderately heavy usage with the device.

With much attention put on smartphones with higher-end spec sheets and flashy bells and whistles, it's great to see that LG is not forgetting about the normal smartphone user. For most of us, features such as battery life, GPS accuracy and ease of use are most important. With a dual-core processor and running Android 4.1.2, the F3 may not whiz through more complicated apps, but the unit does deliver fast and accurate performance with minimal lag.

Out of Sprint's budget phone offerings, the F3 offers the best value for the price. Sprint is offering the F3 for $0.00 when customers port their old number to Sprint and sign a new two-year contract, or outright for $249.99.

If you're looking to upgrade your smartphone or just jump on the Sprint bandwagon, check out the Optimus F3 and enjoy a surprisingly powerful device at minimal cost. 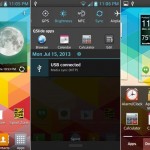 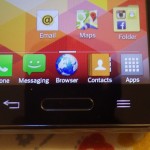 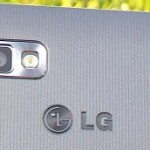 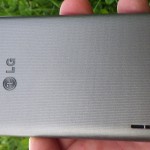 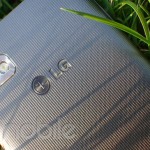 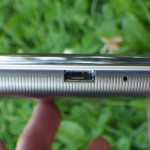 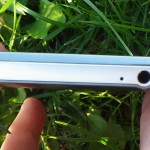 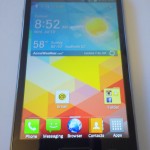 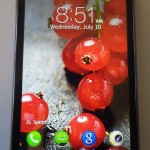