Verizon launched the Galaxy S III recently and the handset is widely regarded as one of the best Android phones available from the carrier. We’ve already taken a look at the AT&T version of the Samsung Galaxy S III, and you can peruse that review for a detailed look at the hardware and software that powers Samsung’s latest flagship phone. In this review, we are going to take a quick look at the Verizon version and explore how it compares to other handsets available from the carrier. Read on to find out whether the Verizon Wireless Samsung Galaxy S III should take top spot in Verizon’s handset lineup.

Under the hood, the Samsung Galaxy S III from Verizon Wireless is the same as the other US models. It ships with a dual core 1.5GHz processor  and 2GB of RAM, which is meant to compensate for the lack of a quad-core processor that is found in the international version of the handset. The S III also has 16GB of internal memory and microSD expansion up to 64GB. The most striking feature of the phone is the 4.8-inch Super AMOLED display with 1280x720 resolution. The most impressive feature is the handset's 4G LTE connectivity which zips along at a cool 10-12Mbps down and 6-7Mbps up. There's also Bluetooth 4.0 and WiFi 802.11 b/g/n.

The rear-facing camera is an impressive 8-megapixel shooter with 1080P HD video capture, while the front-facing camera boasts of 1.9-megapixels with 720P capture.  The handset is a robust 5.4” x 2.8” x .3” and weighs in at a svelte 4.7 ounces. Rounding out the specs is a respectable 2100 mAh battery that promises up to 15 hours talk time or 200 hours of standby.

For a large phone, the Galaxy S III is well-designed. It has a big screen, but its small bezel and thin profile make the handset comfortable to hold. It's very similar to the Galaxy Nexus and the DROID RAZR MAXX. The S III is just a bit longer and a tad thinner. It's also weighs a bit less than either the Nexus or the MAXX.

Though the S III is balanced and weighted nicely for your hand, the phone's stellar physical design doesn't compensate for its lightweight, plasticky feel. Say what you will about the polycarbonate casing, I don't think it compares to the aluminum-glass backing of the iPhone 4S. Admittedly the iPhone is prone to shattering, but the heft of the metallic design gives the iPhone a better feel in your hand than the S III.

Unless you have the hand of a basketball player, the S III also requires you to hold it with two hands. You can swipe and tap to navigate with one hand, but typing, pinch to zoom and other complex gestures require you to hold the phone in one hand and touch with the other. It's a limitation that you learn to accept. It's worth it just so you can keep the gorgeous display, which  is unrivaled by any other handset on Verizon. Lastly, for those who like LED notifications, the S III has a bright, multi-color LED in the upper left corner.

Software-wise, the Verizon Galaxy S III is a slightly different beast from the other US models. It ships with a version of Android 4.0 Ice Cream Sandwich that's been customized for Verizon. Theere are severla Verizon-specific apps which are built into the OS and cannot be removed. They include My Verizon Mobile, VZ Navigator, Verizon Voicemail and the Verizon App Store. It also supports Verizon's Backup Assistant service. Unlike other Verizon phones, the S III does not include any game demos or other bloatware.

It's also worthy to note that the Verizon (and AT&T) version of the phone does not include the free 50 GB of Dropbox storage that's found on other S III models. It also doesn't have Google Wallet, which is found only on the Sprint version of the phone. Surprisingly, I noticed that Flipboard isn't included on the Verizon S III either, but you can still download and install the app from the Google Play Store.

Looking beyond the Verizon apps,  the rest of the S III is Android 4.0 ICS with Samsung's TouchWiz overlay. It has all the bells and whistles of the AT&T version of the handset including a variety of actions like the one that lets you flip over your phone to turn on the speakerphone. Rather than repeat what's already been said about the many software features, you can read about them in our original review of the handset.

Like all new Android phones on Verizon, the Galaxy S III is a 4G LTE handset. It supports 700 Mhz LTE and 3G CDMA/PCS/1xEVDO Rev. A (800/1900 MHz).  The handset's 4G LTE connectivity was steady and reliable, delivering a consistent 10-12Mbps down and 6-7Mbps up. Data on the 3G side was equally reliable, though much slower. During my testing, I didn't experience any dropped calls or connectivity problems.

The Galaxy S III ships with a decent  2100 mAh battery. It's not as beefy as the 3300 mAh Li-Ion battery inside the DROID RAZR MAXX, but it's a step up from the 1850 mAh Li-Ion of the Galaxy Nexus. It's a small boost that makes an appreciable difference in overall performance.  While the Nexus would die out after eight hours of steady usage, the S III makes it through a full day. Standby time is also very good. I left the S III on my desk for several days in a row and, when I finally picked up the phone, I still had enough juice for a short photo shoot. 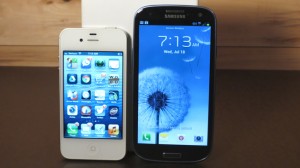 he Samsung Galaxy S III is an impressive handset. The screen is lovely and the phone is chockfull of software features that'll make your head spin. From a hardware-only perspective, it is the best Android phone Verizon has to offer at this time. It's on the large size and not very pocketable, so you have to consider how you are going to use the phone before you take the plunge. If you're active and wear the phone on your belt, you may find it's too big. It's also too big for folks who want to use their phone with one hand and drink a cup of coffee in the other. If you prefer a smaller but still powerful phone, then you should look at the Droid Incredible 4G LTE or the iPhone 4S.

On the software-side, the Galaxy S III is a mixed bag. The average consumer will be happy with all the whizbang features Samsung managed to cram into its TouchWiz enhanced version of Android 4.0 ICS.  Customers that like staying on the cutting edge of technology, however, should pass on the S III and look at the Galaxy Nexus instead. As a Nexus device, the Galaxy Nexus is a candidate to get regular Android updates from Google. The S III will likely receive an update to the recently announced Android 4.1 Jelly Bean, but the timing of this update is unknown.

If you don't know the difference between Ice Cream Sandwich and Jelly Bean (or don't really care), then you can't go wrong with the Samsung Galaxy S III. It's a solid handset with a great camera and it's performance is top-notch. I wouldn't hesitate to recommend it to anyone who is comfortable with that size phone. If you're not sure about the girth of the S III, then travel down to a Verizon store and check it out in person. You might be pleasantly surprised.