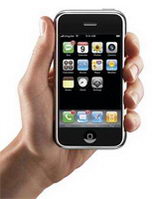 Even the mighty Apple executives are getting a bit rattled at the pressures of the iPhone’s launch. And, with good reason. The Apple iPhone (we’ve said it before an we’ll say it again) is THE hottest thing to grace all of Tech-dom since the introduction of the mobile phone. We’re getting all goose-bumpy just thinking about June 29 – we can only imagine that those execs are at least a little apprehensive.

The NY Times is reporting that, “The anticipation, which is intense even by Jobsian standards, has led to some quiet, behind-the-scenes anxiety at Apple. Some Apple executives worry privately that expectations for the one-button phones may be too high and that first-generation buyers will end up disappointed.”

You can bet that there will be some disappointment (and endless critique) for a device that has built as much hype as the iPhone has. But, rest assured, Apple executives, you have our full support! It doesn’t matter if you win or lose, as long as you did your best.