We’ve been expecting the CDMA Motorola Q9m and it has finally shown itself, in the flesh. Boy Genius got the scoop and posted some beautifully slick photos of the CDMA successor to the Moto Q. Unlike the Moto Q9h, which is a GSM phone, the Moto Q9m (formerly known to us as the “Nelson“) goes back the the original Q’s CDMA roots. It seems the Motorola Q9m has picked Verizon as its debut-carrier – and as such, this beauty’s clad in elegant red to accent its black, rubberized body.

The Moto Q9m sports a miniUSB port, miniSD slot, and the a scroll wheel! That’s right, the scroll wheel that was so missed on the Moto Q9h has made a return on it’s CDMA-brother. But, it seems there’s only a 1.3 megapixel shooter, instead of the 2MP cam that we were expecting.

Still no word on the release date or price point, but you can be sure that we’ll get you the goods as soon as we know for sure! 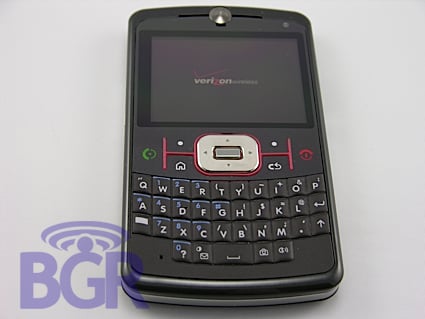 Head on over to BGR for some picture gallery madness! Seriously, they got a lot of pics over there!

Let's keep this one nice and short. The iPhone will require an iTunes subscription in order to setup the phone....