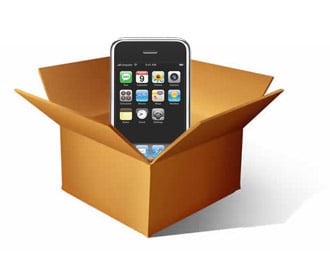 AppleInsider reports that the first US-bound shipments of the eagerly anticipated Apple iPhone have started to make their way to US airports across the country. The precious cargo was couriered by a Hong Kong-based airline that services Atlanta, Chicago, Dallas, Los Angeles, New York, and San Fransisco – with enough time to clear customs and deal with unforeseen delays.

The shipments were escorted by armed-guards as they were cleared by the Transportation Security Administration – on their way to ground delivery vehicles. FedEx has been charged with the timely and safe delivery of this uber-hot cargo, and as such, will be working in teams to deliver the goods – in an effort to thwart anyone trying to run this FedEx delivery truck off the road for its mobile phone content.

The early delivery raises questions about where the iPhone stock will be stored as they await the Friday launch-day. We know that the 6pm launch time will mark the re-opening of AT&T stores – indicating that they are expecting a FedEx timely delivery shortly before the launch (no pressure, FedEx). However, Apple Stores may be getting an early iPhone shipment – days in advance. Apple management has officially prohibited any cameras from entering the stockrooms of its Apple Stores – including all cell phones (whether they have cameras or not) and personally owned Apple computers with built-in iSight webcams.

If there are indeed going to be Apple iPhone stock sitting in Apple Store stockrooms, we hope they’re under armed-guard. We would hate to see another motley-trio of retarded thieves coming to rob an Apple Store, only to have their mugs clearly captured on tape. Seriously, if we get screwed out of an iPhone because some bumbling thieves knocked over our Apple Store’s stockroom, there’s gonna be a man-hunt. Vigilante justice-style!

Boy Genius got word from a "pretty high up source" that the AT&T data plan for the Apple iPhone may...