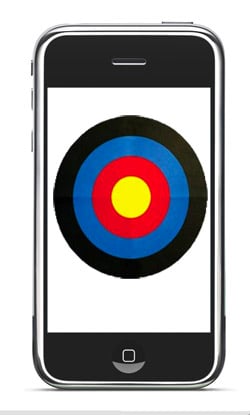 If security experts turn out to be right, and the Apple iPhone fulfills its prophecy of marketing greatness, then yes, the iPhone may well be a bulls-eye for hackers. The same market hype and frenzied anticipation for the hot, new Apple iPhone will make the iPhone a prime target for hackers. What could be a greater accomplishment for a hacker than to take down the hottest, apparently secure mobile phone in recent memory?

Neel Mehta, IBM Internet Security Systems spokesman, thinks that “It’s going to be challenging for the bad guys to exploit them like they do other [smart phones] but there will be a lot of individuals willing to try because of the amount of buzz around it… We’ve seen some very determined attacks on other mobile phone platforms, like the Symbian platform. A lot of these attacks are going to be very hard to launch against the iPhone.”

On the upside, Apple has the iPhone’s OS on lockdown, so hackers will have to work long and hard to try and subvert the platform. Without a publicy-available development kit, hackers will have no idea how to write write applications for the iPhone. And, Apple’s history of making their products easily update-able will also help to thwart any security breaches.

It's only four days left and we have more information about the iPhone from the people who actually had a...