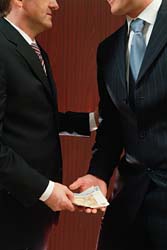 According to TheStreet.com, sources close to the company are claiming that Apple is getting somewhere in the neighborhood of $150-$200 per new contract – quite a difference from our earlier speculation that Apple made $11 for every new iPhone contract. With Apple refusing to allow AT&T to give any new-contract rebate or subsidy for new iPhone users, it makes sense that the wireless carrier pony up a bounty for each new contract (or did Apple demand such a deal?). Third party dealers make even more when they sign up new contracts with data plans, so a $200 bounty doesn’t seem like such a bad deal for Apple.

If these reports turn out to be true, Apple will be beating the hell out of Wall Street’s earnings estimates for the company – Jobs will be making money faster than anyone ever thought possible.

FlickIM – AIM client for your iPhone

The iPhone really, really needs to have a built-in iChat application. It's a shame that Apple didn't give us the...