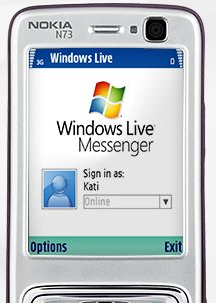 The force is strong within Nokia, it must be used for good. We fear that the dark side of Microsoft may have tempted the Finnish mobile phone giant into playing with fire. Nokia has already gone into cahoots with Microsoft to license the PlayReady DRM scheme that we so frowned upon. And now they’re getting seduced by the power of the Windows Live application suite.

If you’re rocking a Nokia N73, N80 Internet Edition, N95, N76, or N93i, you can head on over to Nokia’s Windows Live website and download the free software suite for your S60 phone – as long as you’re within the borders of Denmark, Finland, France, Germany, Netherlands, Norway, Spain, U.K., Sweden, Saudi Arabia, or the United Arab Emirates.

There’s even talk of the Windows Live applications coming to compatible S40 devices starting next year. Tread carefully, Nokia. Soon you might find yourself unable to escape the seductive grasp of the dark side of the force.