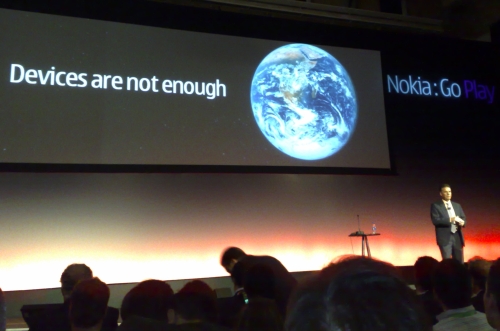 The image above of Nokia CEO Olli-Pekka Kallasvuo standing in front of a room full of press proclaiming that devices are not enough is a sight that sent shivers down my spine. When you take into consideration how the company has made revenue for the past two decades, on mobile devices, you realize that the next transition is about to happen and you’re witnessing history. The first thing people are going to ask is why bother Nokia, you’re already on top of the world right now in the mobile sector?

The old saying goes that to understand and predict the future you have to be a student of the past. I like to correlate Nokia’s history to that of a being a Finnish citizen. In 1865 there were no telephones and the primary form of communication was via text printed or written on paper. Fredrik Idestam setup a factory in Southern Finland on the banks of the Tammerkoski rapids and later the Nokianvirta River. He wanted to sell paper to the Finnish people and reap the benefits of this ever increasing demand.

In order to make paper you need to cut down trees and for the Finnish citizen that meant work in the forest. In 1890 people didn’t own vast amounts of clothing like we enjoy today, so it was only logical to make boots out of rubber that would keep you dry and clean. With that in mind the Finnish Rubber Works was started; to not only provide equipment for the workers, but for the machines used to make the actual pulp and other industrial products.

Now there are all these Nokia employees cutting down trees and making paper, they are friends and want to keep in touch, but how do you do that in 1912? You start the Finnish Cable Works and lay down the start of a communications infrastructure. People also need power and what better way to insulate cables than with rubber, the same rubber you’ve been making for the past 14 years.

For the next half century things are going great. Finnish people are cutting down trees wearing Nokia boots to make Nokia paper that will probably have information written on it at night time thanks to a light bulb powered by a Nokia cable. With all this data now floating around there has to be an easier way to store, locate and manipulate it. Computers are the wave of the future; the world realizes this and companies begin pouring tons of money into research and in 1960 Nokia begin selling computers to fill these new demands.

The paper producer, cable maker and electronic equipment manufacture didn’t become an official corporation until 1967 when Björn Westerlund was to be its first president. This company is so big that the Finnish people sitting at the top of their respective departments need some way to communicate while traveling around the country. In 1981 the Nordic Mobile Telephone company is created and one year later the first car phone is release by Nokia, the Mobira 450.

Rolling around in your Mercedes with a phone must have been awesome sight to see, but what about something to carry around with you no matter where you are? In 1987 the Mobira Cityman 900 was released and it was the first mobile phone to weigh under a kilogram coming in at only 800 grams with a price tag of close to 4500 Euros. As time went on these things obviously got smaller and cheaper and more capable; the regular Finnish man, woman and child could now keep in touch, regardless of location. 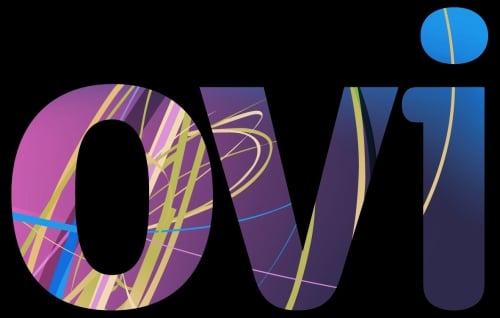 20 years later, on August 29th, Ovi was announced and with that the next page of the Nokia story is ready to be written. Phone calls and text messages are fantastic and have served us well for a long time, but people want to do more with their mobile and this is where the future is heading. No longer are we communicating via text or speech, instead we share photos, movies, music, games, people want to share their lives and the uptake of Web 2.0 services in the past few years proved this. To my disappointment the major news outlets aren’t taking this seriously while on the opposite end of the spectrum I can’t stop thinking about what this will mean for the future of services and the telecommunications industry as a whole.

Ovi will launch and give people a music store, videogames with N-Gage and mapping data. It will let you integrate with the communities you and your friends already use and more details will be given out over the course of 12 months. Resistance will be met; the services industry is something operators have a grasp on and they will not give up their revenue streams without a fight to the death. Sales to operators are a major source of income and why Nokia has no market share in America. In the states people are nickel and dimed to death with charges for anything and everything. Features that regular unbranded devices come bundled with are intentionally being removed to increase an operator’s bottom line and Nokia frankly doesn’t want to play by those rules.

Ovi puts the ball in Nokia’s court and it will be a game that will end in either a stunning victory or a horrible defeat. Here are some of the things I am looking forward to:

Ovi was personally my favorite announcement at the Go Play event. It came out of nowhere, it partially gave us a glimpse into the future, but most of all it gave me confidence that Nokia “gets it” when it comes to future usage patterns of mobile devices. Operators becoming pipes will do more good for this industry than anyone can imagine, after all the ultimate platform for innovation is the internet.

Expect more coverage of the Nokia Go Play event thru out the weekend.

Just when we thought the Nokia N73 Special Edition for Middle East and North Africa markets is the single best...