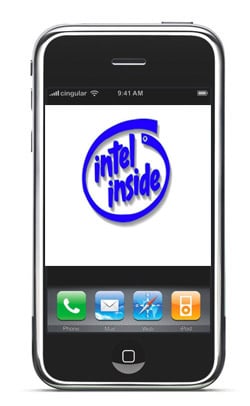 Could the next Apple iPhone bear the famous “Intel Inside” sticker that tells everyone that your packing some serious Santa Clara heat? Well, given Apple’s preference for minimalist design and clean lines in their sexy-fied products, it’s not likely that any Apple device will be sporting an “Intel Inside” sticker, much less the iPhone. But, according to DigiTimes, the Cupertino-based iPhone maker is considering a move to Intel’s Moorestown MID (mobile internet device) processor.

Remember Intel’s iPhone Clone? Yea, well it looks like the Moorestown processor that powered that trick piece of hardware piqued Apple’s interest. The Intel Moorestown platform is slated to launch in 2009 and we’re hearing that Apple might be ditching Samsung’s ARM-based chipsets for the new hotness from Intel. More power is always a good thing, and Intel claims that Moorestown will bring serious computing power while keeping power consumption at “ultra-low” levels.

An Intel-powered Apple iPhone with GPS and 3G? It’s nice to day-dream, but that doesn’t mean it won’t happen. We’re going to be keeping a close eye on this one, folks.

Thanks to Apple's recent iPhone update (v1.1.1), anyone upgrading to the new iPhone firmware will find that their third-party application...