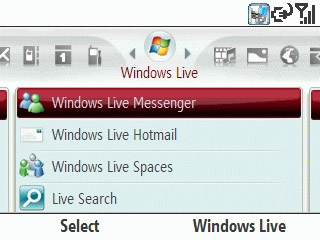 Remember that Microsoft patent application for a more user-friendly UI? Well, that may have been the spark that ignited this latest rumor that Microsoft will be rolling out a Windows Mobile 6.1 OS update with a “carousel” UI. Now, the interesting thing is that the story has been pulled off of pocketinfo.nl – which, to us at least, lends a bit more credibility to this rumor.

The Windows Mobile 6.1 OS is rumored to be similar to the Windows Mobile UI overlay that we last saw in the Palm Treo 500v. But, instead of a horizontal scroll, the WinMo 6.1 UI might use a vertical scroll layout.

A major update to the Windows Mobile 6.0 OS that significantly changes the UI? And by February of 2008? It almost sounds too good to be true. Almost.

Check out the video below. If the Windows Mobile 6.1 UI is supposed to look something like this, it could be interesting. But, this rumor firmly planted in the land of whispers and speculation, so don’t hold your breath.

Most likely headed to AT&T's stable of Samsung A7x7 mobile phones, the Samsung A747 has been spotted on the FCC's...