Free unlimited calling plans are MetroPCS’s forte, but they just don’t have any youth-oriented messaging phones. As such, MetroPCS has announced that they are picking up the horizontally-sliding Samsung R410 to boost their wireless stable. What’s with the horizontal slider, you ask? Why, it reveals a full QWERTY keyboard for the text-messaging set.

Unfortunately, when $35 unlimited calling plans are involved, you’ll have to sacrifice a couple power-features. The MetroPCS Samsung R410 trades a multi-megapixel camera and EVDO data connection for a lowly VGA shooter and 1xRTT data speeds. On the up-side, there’s a bit of stereo Bluetooth goodness to keep you in Bluetooth-headphone-bliss as you lament the absence of a decent data connection. 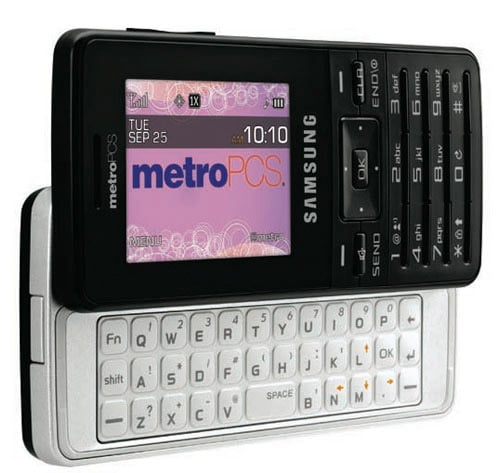 But hey, if unlimited wireless calling on a text-messaging ace like the Samsung R410 is everything you’ve been wishing for, then head on over to MetroPCS and grab your own Samsung R410 for somewhere between $150 and $200. Oh, and unlimited AIM chats, text messages, and internet access will bump up your unlimited calling plan to $50 a month.

Actually, for the price and the intended demographic, we’re liking the Samsung R410 more and more.

So, remember when Virgin Mobile went public and reported incredible earnings on their IPO? You know, the IPO where Virgin...