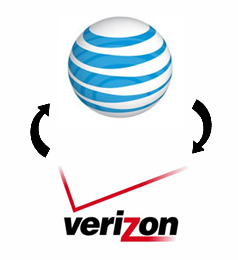 Network carriers are notorious for slinging mud in their rivals’ direction at any opportunity. It’s a dog-eat-dog business world, after all. So, what’s the only thing that can get the two biggest rivals in the US wireless market to work together? Mutually beneficial business arrangements, of course. You see, the FCC laid down a couple ground-rules when they approved AT&T’s acquisition of Dobson Communications for a cool $2.8 billion. AT&T had to agree to forgo rights to the Cellular One brand name that was previously controlled by Dobson Communications – they’ll be selling that brand-name to Trilogy Partners. Additionally, the FCC is requiring that AT&T offload some of recently acquired Cellular One’s rural-market assets.

So, with Verizon Wireless’s planned acquisition of Rural Cellular Corporation for $757 million in mid-2008, AT&T and Verizon Wireless have agreed to tap each other’s, ahem, assets – by which we mean the two companies will be selling each other a portion of their recently acquired assets (what did you think we meant?).

Isn’t it nice to see network operators get in bed together? Just ignore the fact that AT&T basically had to pay Verizon Wireless to play their little game.

It feels like we're always complaining of the lack of MMS (that's picture-messaging for the lay-folks) on our iPhones. But,...