Google’s announcement of Android was big, there’s no doubt about that. But, the OHA and Android aren’t the only group to push for an open-source mobile phone movement based on Linux. The LiPS (Linux Phone Standards Forum) Forum has been championing the Linux cause for handsets on the open-source tip. With the might of Google behind it, Android and the OHA stole the show – almost banishing the LiPS Forum to obscurity – until today. The other Linux movement has finalized the specifications on their Release 1.0. LiPS aims to “enable mobile industry players to achieve basic interoperability for applications and services deployed on Linux-based phones,” in order to foster the development of services and compatible devices. And, with LiPS good to go, the open-source handset market can look forward to “interoperability through real open standards and specifications, not de facto acceptance of single platform implementation.”

So, just what is the difference between an open-source model and the more traditional (ad-hoc) model? These charts should give you a good idea: 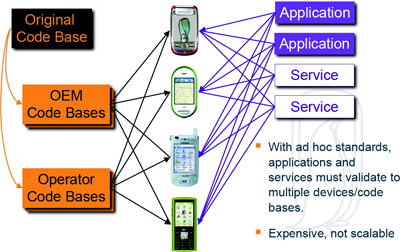 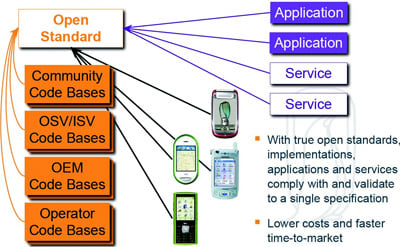 We’ve heard it all before. But more competition hopefully means better innovation and hardware offerings. Next step? Get some hardware manufacturers and developers to back LiPS’s wares.
[Via: Linux Devices]

What comes to mind when you think of super-geeky gadgets like, oh, mobile phones and DAPs (Digital Audio Players)? You...