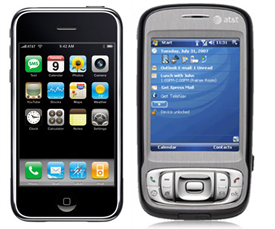 Well, we set to find out exactly what kind of load-times you can expect in real-world situations and with real-world devices. For this test we used an AT&T Tilt 8925 (HTC Kaiser TyTn II) on AT&T’s 3G network, and squared it off against an Apple iPhone on AT&T’s EDGE network. Webpage load-times were the focus of this test, and load-times were rounded down to the nearest second. Load-times were recorded from the moment the page started to load until the status-bar indicated that the page was finished loading (until the progress indicator-bar disappeared).

Hit the link for the video.

Hypothesis:
Webpage load-times are bottlenecked by the device’s processing power and page-rendering technology. This should result in similar load-times between the iPhone and the Tilt.

Results:
What we found was completely expected. There’s more at play then just throughput. The iPhone’s web-kit based Safari browser allowed it to load pages almost as fast as the AT&T Tilt. We used the Pocket Internet Explorer that comes pre-installed on the Windows Mobile 6.0 Professional-based AT&T Tilt – and it proved to be the device’s downfall. Both devices had similar processor speeds, so that aspect was fairly controlled for in this test.

Check out the video below to get an idea for real-world load-times.

From a purely objective standpoint, the iPhone is an incredibly competent web-browsing device – especially given its EDGE-only limitations. The AT&T Tilt is most definitely the faster web-surfer, but only marginally so (the load-time gap is more pronounced for image- and javascript-intense webpages such as IntoMobile.com). Interestingly, the iPhone beat out the Tilt in loading the ShopBop.com webpage. The rendering engine combined with good processing power keeps the iPhone nipping at the heels of 3G devices. From a subjective standpoint, we’d have to say that the iPhone’s web-browsing experience is clearly superior and is worth waiting a few extra seconds. Unfortunately, we weren’t able to test any Opera browsers. We expect that Opera on the AT&T Tilt would blow the iPhone out of the water.

On that note, keep your eyes peeled for a follow-up test with the Opera browser!

We can’t wait for the 3G iPhone…

Time magazine does it again; Awards Apple iPhone as the top gadget

Roughly a month ago we saw the Time magazine awarding Apple iPhone with its "Invention of the Year" title. Now...