At least in the Western hemisphere (outside Japan), Panasonic is not that known as a mobile phone manufacturer. They are better known for their in-home cordless phones — hey, I got one of those. That’s certainly a capital the Japanese electronics maker wants to leverage. 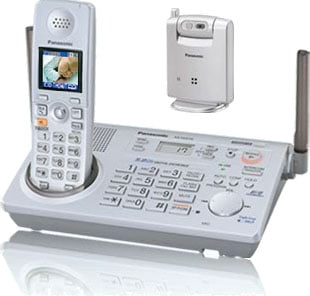 That being said, they’ve announced their advanced Link to Cell KX-TH1211, a mobile phone accessory that connects a Bluetooth enabled mobile phone to cordless handsets in the home. The idea is not only to preserve the mobile phone’s battery life, but also to provide users with better reception to move throughout the home. And while I don’t see much of a point here — I’m home and I can recharge my mobile phone whenever I want — I’m sure there are some folks who disagree with me, and that’s fine. They would be pleased to know that the KX-TH1211 also offers simple service registration and supports up to two mobile phone numbers, meaning multiple people in the home can benefit from this mobile accessory. In addition, calls to the registered cell phone numbers can be programmed to specific handsets in the home.

Finally, let’s talk about the price. Link to Cell KH-TH1211 comes equipped with one handset and will be available in March 2008 with a suggested retail price of $99.95. Additional handsets have a SRP of $39.95.

Well folks, the Motorola Z10 is now official. Yap, we've seen it several times in the past and were wondering...