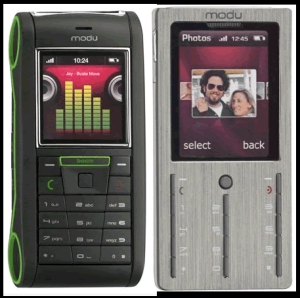 You might remember a little while back that Dusan posted about us being teased by the Modu, and we were wondering what it is – well now we know….

At the heart of it is a tiny monoblock Mobile phone (get a picture of a Sony Ericsson W880i in your head, but smaller), which can be inserted in a number of jackets (see pic above), or, into ‘Modu mates’ (please note: I did NOT say inserted in to your mates – that would harsh, painful, and largely unnecessary) 🙂 The ‘mates’ are apparently Modu-enabled consumer electronics devices, and from the video, you could logically assume these were things such as a Sat Nav etc. In fact, there is a broader spread, and big names like Blaupunkt have signed up to create interworking devices.

The first MNOs to sign up for this are TIM (Italy), Beeline (Russia), and Cellcom in Israel – quite an eclectic bunch!

Ben’s take: So my thoughts on this are two-fold – having worked previously for a handset vendor that came up with the idea of changeable panels/fascias on devices, I know what might seem like a GREAT idea in Marketing, actually does not translate at all well practically – getting the panels/fascia/jackets in to the market widely, and the resulting punt you are taking financially, are major issues and risks, respectively.

On top of that, I remember from 3GSM a few years back a company called IXI, who had a Bluetooth gateway – essentially a good idea where you put the subscriber SIM in the gateway, and then have cheaper, simpler devices that connect via BT to it, such as a phone, PDA, etc.

Why do I mention these, you ask? Because Modu strikes me as a mashup of them both – changeable faceplates, and changeable devices – powered by a central component – whilst I don’t think either of the solutions I mentioned have gained what could be considered ‘mass acceptance’, Modu might just have that momentum. They have OpCos signed up, they have the consumer electronics manufacturers signing up – this could be a flyer. Stay tuned!

After a long wait, consumers can now purchase WildCharge through their website  . In addition, WildCharge has announced the adaptors...