In yet another iPhone-validating statistic, Google announced at Mobile World Congress Barcelona that Google search traffic from iPhones was 50 times greater than search traffic from any other mobile device. We already knew that the iPhone sent a lot of traffic to Google, but this is just outrageous. It seems that iPhone users are addicted to Google search – and it makes sense given that the iPhone Safari browser’s built-in search bar is defaulted to Google. 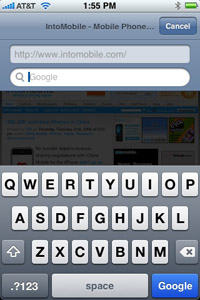 In fact, traffic figures were so skewed that Google engineers thought they had goofed in their calculations. “We thought it was a mistake and made our engineers check the logs again,” Vic Gundotra, head of Google’s mobile operations told the Financial Times at the Mobile World Congress in Barcelona. In the end, it seems that iPhones were indeed responsible for 50 times as many searches to Google as any other mobile phone/device.

So, just what does all this search traffic mean for Google? Well, aside from the anecdotal evidence for the iPhone’s popular function as a mobile internet device, the stats point toward serious revenue for Google’s mobile internet ad-model. As more and more devices and platforms move towards an intuitive and easily accessed mobile web experience, Google (and maybe Yahoo) will be seeing more and more search traffic from mobile devices. We’ll definitely be seeing more mobile advertising in the near future. Don’t say we didn’t warn you.