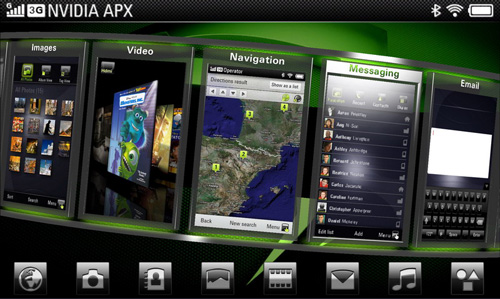 If I told you I saw a user interface that made the iPhone look like a Motorola RAZR would you believe me? Probably not. Probably because no one really cared about what nVidia had to announce at the Mobile World Congress since they didn’t announce a device, but instead a processor that will eventually make its way into mobile phones. The APX 2500 is a piece of silicon that has an ARM 11 core which can scale up to 750 MHz, an integrated GeForce graphics accelerator capable of Open GL ES 2.0 and Direct3D Mobile and best of all it can encode and decode 720p resolution content.

Samples are floating around now and sadly nVidia is tailoring this new processor towards Windows Mobile enviroments due to the short time to market. nVidia wants to enter the market that companies like Texas Instruments, STMicroelectronics, Freescale, Marvell, Renesas, Qualcomm and Broadcom have been fighting in for … forever really.

Is there a possability Nokia is using them yet doesn’t want to say anything about it? I ask because in nVidia’s marketing material there is a slide that highlights the direction they [nVidia] think the mobile industry is heading. Currently mobile phones are voice devices that have multimedia functions bolted on, nVidia believes that the new era will be an age of “multimedia computers” (a term Nokia uses to describe their current Nseries device) with voice telephony as a feature. Sounds like something straight out of Anssi Vanjoki’s mouth.

The prototype I’ve seen was running Windows CE 5.0 and had a completly custom user interface running on top. In this 60 MB video you can see just how amazing it is. Equally as impressive was the fact that while I was given the chance to zoom around this UI which felt 2 years ahead of everything else there was an HDMI cable coming out of the thing connected to a large flat screen television playing a movie in 720p; color me impressed.

The unit I had a chance to play around with comprised of a 4 inch 800×480 resolution screen, HSDPA, WiFi, 256 MB RAM, 5 megapixel camera and some flavor of mobile TV. It wasn’t a device for you and me, but intended for developers. The UI I mentioned at the begining of this article and which you can see in the link above was created in 5 weeks. The first commericial products to come out based on this silicon isn’t due out until the second half of 2009, but that just further compounds statements people like me [scroll down to “What can we expect in 2008?”] and Ewan Spence have been saying: that 2008 is the year that folks living on the bleeding edge of the wireless space will be sitting in a chair twittling their thumbs waiting for the next year to see the boundries today being pushed to a new level.

HTC: No Imageon video drivers, but we’ll improve video acceleration for our customers

It's always nice to see corporate big-wigs actually putting the customer ahead of any internal-policy nonsense. HTC has apparently done...