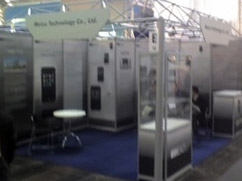 Meizu’s (as well as a few other booths) booth at CeBIT 2008 in Germany was raided by police and required to leave the showroom floor and remove almost all of their booth display materials. According to local newspaper Heise, cops announced Wednesday morning that the Meizu booth was shutdown over copyright issues regarding part of its product portfolio.

So, Meizu is now back on the CeBIT showroom floor and has their booth back in order – including a display model of the Meizu M8 miniOne. However, the music player has been taken down from the booth’s displays.

Is this a win for Meizu? The company’s seeming legal right to carry on with their Meizu M8 miniOne is interesting indeed. Perhaps that Chinese patent carries some weight.

iPhone coming to Switzerland on April 4?

We're not sure should we believe this or not. Let's just turn around for a second: Apple needs new markets...