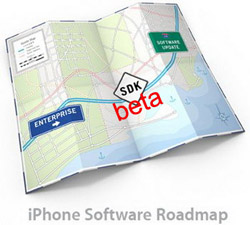 Just a day ahead of the much-awaited iPhone Software Roadmap press event, Steve Jobs sat down with with Apple shareholders to talk shop. And, in traditional Jobsian form, Stevie avoided talking about the upcoming release of the official Apple iPhone SDK. The only bit of iPhone SDK info he let slip was that there will be “a lot of apps out there this summer.”

Now, it’s not clear if Steve’s statement means that Apple will be releasing the iPhone SDK post-haste and expects developers to crunch out those “apps” right-quick, or if the iPhone SDK isn’t slated to be released until Summer. We’re crossing out fingers for the former. It would be a shame to have to wait a few more months for even a beta version of the iPhone SDK.

And, when probed regarding the iPhone’s potential support for Adobe’s Flash format, Steve Jobs basically shot down our hopes of embedded video-viewing glory on the iPhone. Apparently, Jobs isn’t going to let the scaled-down, cellphone-version of Flash, dubbed Flash-lite, mar the iPhone’s “full web-experience.” Apple doesn’t want to bring anything less than real Flash to the iPhone, but the problem is that the full-fledged version runs too slowly on the iPhone. So, we’re not going to see Flash on the iPhone anytime soon.

Either way, we’re excited to see what Apple has in store for us tommorow.

[Via: World of Apple]

Spyker shows off LaTurby and MonteCarlo at CeBIT

Following on the Dutch automaker's lackluster, branded handset offerings from last year, Spyker is set to roll out two new...