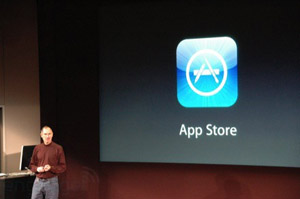 It’s not just Apple’s iPhone SDK-based AIM client that made splash, there were a number of demonstrations at today’s iPhone Software Roadmap that gave us some insight on what to expect later this year. The early seeds of the iPhone SDK seems to have gone to some good use.

Most notably, “Spore,” from EA Games, was shown to be working on the iPhone with 18 levels of complete gaming. Spore was built for the iPhone in just two weeks and is being touted as “first 3rd party game on the iPhone.” Salesforce.com also demonstrated their iPhone-based sales-tracking application, and Sega even came to play with “MonkeyBall” for the iPhone. There was a lot of accelerometer usage in these demos – like the “Touch Fighter” jetfighter game (tilt the iPhone to control the jetfighter) and the photo editing application that could be reset with the shake of the iPhone (think etch-a-sketch, iPhone-style) – so it’s safe to say that we’ll be seeing applications and games fully-integrated with the iPhone’s more advanced features.

Now, as far as application distribution, Apple wants to take a “small” cut of third-party application sales. They claim that developers will get paid 70% of their software sales-revenue on a monthly basis – that is, unless the developers choose to make their application freeware. Apple wants to give developers access to Apple’s distribution infrastructure without having to worry about credit card fees, hosting fees, and marketing costs, but again, for a 30% cut of sales.

And, to make application-delivery as simple as possible, Apple has announced that they’ll be including the “AppStore” in the next iPhone v2.0 firmware update (slated for June). The AppStore will be a native iPhone application, similar to the iTunes application that is available on newer iPhone firmwares, that allows iPhone users to download third-party applications directly on to their iPhones (no computer necessary).

There was speculation that Apple would lock down application distribution by requiring that iTunes be used as the delivery-platform, but it seems that Apple decided to go with a non-iTunes solution. AppStore will still sync with iTunes, so the speculation did play out to some extent, but it’s nice to see that application-delivery will not be tied to a computer. Of course, Apple recommends that application be downloaded via WiFi.

In order to publish applications (make them available to the public), Apple will require that developers sign up for the Apple dev community with a one-time $99 registration fee. In return for that C-note, developers will receive a digital signature that allows Apple to track and approve their applications.

Jobs confirmed that applications will only be delivered to the iPhone through the AppStore – and only developers with that aforementioned iPhone dev community membership will be allowed to publish applications. Apple wants to be able to track and control the applications that are delivered to the iPhone and will require that all developers buy the $99 digital signature – if you mess up or publish some malicious code, Apple will know who did it and hunt them down. The AppStore will also deliver the freeware applications, fee-free of course, but will still require those freeware developers to play nice and pay that $99 fee.

As expected, the dock connector is off limits to developers, with the exception of those developers that are part of the “Made for iPod” program.

There’s a lot to look forward to with the next iPhone firmware update, so mark your calendars for June. We love waiting…

Now this is one unique feature that deserves some recognition. Sprint, always looking for another way to plug the massive...