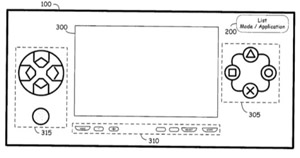 The USPTO must be busy these days. With every tech company jockeying to secure legal rights to anything resembling an idea, it’s a wonder how the truly deserving and innovative ideas ever get issued a patent. Nevertheless, Sony Ericsson has filed for yet another display patent. 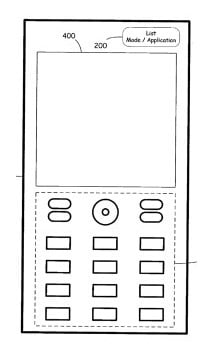 phone in landscape orientation and sporting a gaming layout – the display shows gaming controls similar to the PSP, and Sony Ericsson even makes mention of the PSP in their patent application. Another diagram shows the cellphone in portrait orientation with more traditional handset controls – keypad and navigation keys below the call-display.

To quote the patent application:

“A system and method is disclosed for reconfiguring the graphical user interface (GUI) of a mechanically vibrated touchscreen display associated with a portable mobile communications device that is operable in a variety of modes.”

Apple took the stage by using accelerometers in the iPhone to detect orientation changes and rotate the screen accordingly, but Sony Ericsson seems to be taking this idea to the next logical step. The idea is really obvious, but then again, the best ideas (and patents) are usually the simplest.