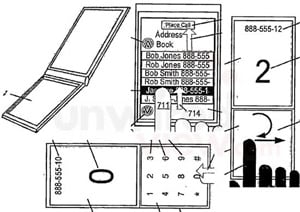 Apple’s first foray into the mobile space has been a terrific success. And, not just as the company’s first-ever handset offering, the iPhone has succeeded in an entrenched and competitive handset market.

Still, Apple’s a bit of a one-trick pony with their iPhone. They’ve only got one form-factor with one model (different storage capacities notwithstanding). So, what could Cupertino do to throw some variety into the mix? Make an iPhone Flip, of course.

The latest patent application to surface at the USPTO indicates that Apple is at least considering a flip-phone form-factor for their iPhone. Entitled, “Dual sided trackpad,” the patent application describes a method whereby a device’s capacitance touch sensor panel and display panel are located on separate halves of the flip. The upper portion serves as a display, which isn’t really innovative. But, and here’s the innovative part, the lower portion of the flip is a transparent touchpad with dual-sided capacitance touch technology. Unwired View‘s Photoshop rendering shows off this idea beautifully. 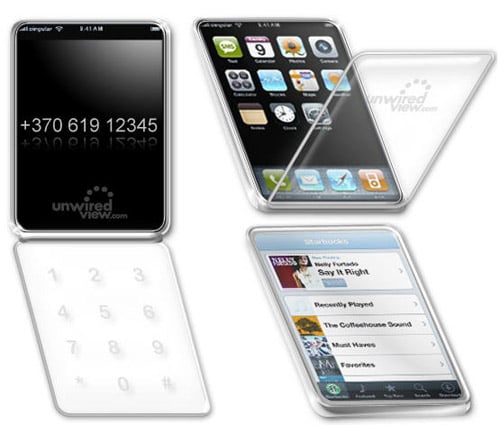 What does that mean exactly? Well, imagine being able to view the device’s main display with the flip closed – being translucent, the lower flip doesn’t obscure the display. And, the dual-sided capacitance touch flip works while in the closed position (overlayed on the display).

Then imagine that you’ve got the flip open. The dual-sided nature of the flip allows for an entirely new world of multi-touch gestures – the front side of the flip could be used for certain inputs in tandem with the back side of the flip. Or, maybe you want to “draw” the phone number onto the flip. That would work too. Of course, the flip will still function as a standard numeric keypad. 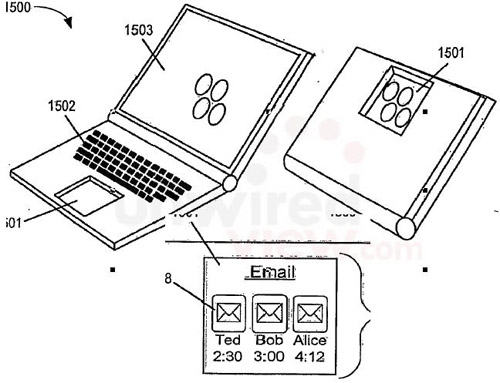 The possibilities are endless, especially for laptop trackpads and tablet computers. But, it all hinges on Apple’s decision to go forward with the tech in this patent application. And iPhone Nano with this dual-sided trackpad technology would probably do quite well among those potential iPhone users that really want a smaller form-factor, not to mention those that just want a clamshell. Fingers crossed…

Samsung has announced that their new Samsung "MiniSkirt Season 2" offerings. No, Samsung is not getting into the reality TV...