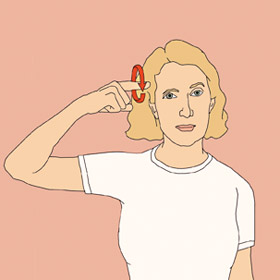 If your compulsive urge to surf the internet, hammer out an email, or tip-tap a text message is starting to interfere with your daily activities, you might be glad (or not) to hear that you’re facing addiction straight in the face. Forget that “texter’s thumb” of yours, that need for internet/email/text messaging could soon be a true-blue mental illness.

The Ottawa Citizen reports that this month’s issue of the American Journal of Psychiatry features an editorial that describes internet addiction, which can include “excessive gaming, sexual pre-occupations and e-mail/text messaging,” as a common compulsive-impulsive disorder that should be considered being added to the Diagnostic and Statistical Manual of Mental Disorders (DSM) to help therapists identify and diagnose the condition.

Apparently, compulsive internet/email/text messaging behavior is quite prevalent, and it works like any other addiction. Internet addicts experience cravings, urges, withdrawal and tolerance – which leads to the addict seeking more and more online time to satisfy their urges. Dr. Jerald Block, a psychiatrist with the Oregon Health and Science University, says that such addictions can cause people to lose track of basic drives, like eating or sleeping. And, some patients may even require medication or hospital care.

Many addicts use the internet to escape reality. Previous studies have suggested that most internet/email/text messaging addicts are primarily highly-educated, introverted males, but recent studies seem to suggest that middle-aged women are more at risk for the addictive behavior.

The next DSM is due in 2012, so there’s still time to argue to case for internet addiction.

You mean companies can sue for copyright infringement on the design of a particular handset? That must have been news...