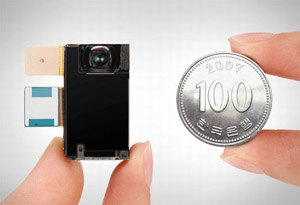 Sure, there are handsets out there that boasts 8.5mm thickness, but you sure aren’t going to find an image sensor inside that’s capable of capturing more than a few megapixels. But, when you’re talking about an 8 megapixel CMOS image sensor with anti-shake, low-light compensation, ISO 1600, smile recognition (what’s with this smile recognition recently?), face-tracking, and macro mode, 8.5mm thickness is an accomplishment indeed.

In fact, it’s another “world’s first” from Samsung. The company is touting their new 8 megapixel CMOS image sensor that measures a mere 28mm x 15.3mm x 8.5mm, and seems to one-up Kodak’s recent 5 megapixel sensor in both pixel density and size. But, Kodak’s kit does ISO 3200, 30fps video at 720p resolution, and has Kodak’s serious experience backing it, so they win in that regard.

Assuming that the Samsung 8 megapixel monster will be paired with some decent optics (no plastic, please), we could have some seriously competent shooters hitting the market soon. The potential weakness of this new sensor would be its performance in marginalized lighting conditions – Kodak specifically developed their image sensor to more efficiently detect light. To Samsung’s credit, the new image sensor uses Low Light Trio technology that compensates for low light and enables decent light sensitivity while indoors. 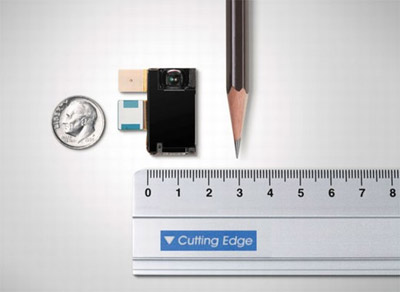 Commercially available 8 megapixel cameraphones with advanced image sensors and high-level optics could start to trickle into the mass market soon enough. With an emphasis on high-level optics, of course.

Samsung plans mass production of their 8.5mm megapixel image sensor in 2Q 2008, with samples shipping to manufacturers in May.

It looks like the British arm of the world's largest wireless operator is getting ready to seriously push the mobile...