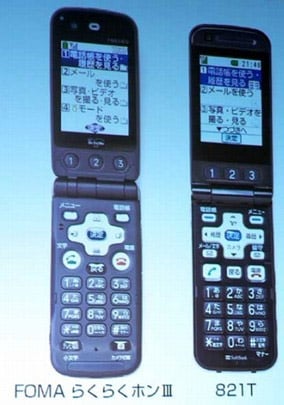 You mean companies can sue for copyright infringement on the design of a particular handset? That must have been news to Toshiba, seeing as how they blatantly copied a RakuRaku handset made by Fujitsu. You see, the Toshiba Kandan Keitai 821T is an almost carbon-copy of the Fujitsu Foma RakuRaku Phone III, prompting NTT DoCoMo and Fujitsu to get their lawsuit-on with Toshiba in the cross-hairs.

The suit states that Fujitsu has been designing the RakuRaku phones for senior citizens and that Toshiba has copied the RakuRaku Phone III’s button layout and interface, with a body that bears a striking resemblance to the original. DoCoMo apparently warned Softbank prior to the launch of the Tosh 821T, but Softbank decided to launch the 821T as a handset for the “junior population.” DoCoMo is seeking to have Softbank Mobile pull the Toshiba 821T off the market.

Something tells us that NTT DoCoMo and Fujitsu has a pretty strong case on their hands. This isn’t China…

Apple gets another business suit for iPhone – Sybase iAnywhere

Apple's iPhone is getting seriously gussied up for its new role as an enterprise smartphone. With Apple bringing Microsoft Exchange...