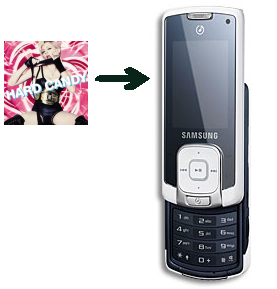 Samsung has reached a deal with Warner Music to preload Madonna’s upcoming album “Hard Candy” the “4 minutes” video on the F400 handset. The handset also has B&O (Bang & Olufsen) speakers and will apparently launch in “early June in France (it’s already available in the US)“.

This follows on from the previous announcement (which we reported on here) of Warner and Vodafone partnering to give certain regions early access to Hard Candy.

Sony Ericsson has partnered with Def Jam Records to preload a stack of digital assets on to the W910i limited...