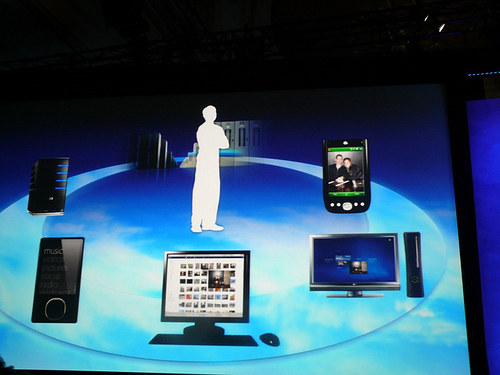 Microsoft released an invite only beta to their Mesh service recently, a service that currently is meant to sync your files and folders across multiple machines and to the cloud. Everyone is saying what’s the point? The point is Microsoft just laid down one of the key pieces of infrastructure for the future of the internet.

Services like Flickr, Share on Ovi, Photobucket, what do they do? They help you share your files with friends, family and the world. How do they operate exactly? You send them your files, they then host your images and provide an experience around your data. Why use one photo sharing site versus another? Differences in user interface, price, storage limits, the reasons can be infinite, but it doesn’t get rid of the fact that your data is now in the possession of a third party and that creates brand stickiness. There could be something better out there, but you don’t want to move all your stuff to another service, too much hassle; this is where Mesh comes in.

Many people have an idea for what the future of the internet will look like. I’ve outlined my vision several times on this blog and with several of you in private, but essentially it is about putting the user at the center of the internet versus the servers which once used to only transmit data and services now which are nothing but data silos where we hang out with our friends. The future will be about you and your digital life under your control. There will be one identity you can use across the entire internet, there will be one data repository that you control who has access to. Don’t think of data portability as something companies have to adhere to, because they don’t want to give up the information they’ve collected about you and if they say they’re willing to then you’re usually left with a bunch of files you can’t really do anything with until a clone of the service you just left appears on the market. Think of data portability as an enabler to the data you’ve already created.

The data you create should be data you control and that means thinking about services a bit differently than you think about them now. It requires mixing the old pre “Web 2.0” way of thinking with the new and current way of socially enhanced cloud services. Take a folder of images on your desktop for example. You own that desktop and are logged in therefore the computer knows it is you. That folder of images can be experienced in various different ways. You can just as easily open the folder itself and view thumbnails, or wait for your screen saver to kick in and scroll your images across the screen, or if you have a touch enabled machine you can flip through the images and move them around the space of your LCD. Those different ways of viewing your data are unique unto themselves, but they’re all based off the same data, the same JPG files if you will. That is how you work on your desktop today, but imagine that scenario with even more data formats and more machines all attached to a global network. That is the future of the internet.

The data you create will automatically go to some cloud based storage system or sync to your computer, but the real interesting things happen when services begin asking you permission to access your files. Suddenly the experiences and new ways of visualizing your data become the key differentiators of services, without the commitment of having to upload your life all over again. It will become increasingly difficult to switch services as we create a larger digital footprint of the memories we experience on a daily basis with the current ideologies of the internet. You think the photo sharing site you’ll be using in 5 years will be the same one you’re using now? If there is a better one would you want to switch to it, but are apathetic to do since you have thousands of images hosted somewhere else?

Microsoft Mesh solves one of the issues that are holding back the next period of growth to occur on the internet. Identity is another, but that is another subject for another post. Data always was and always will be the most important cornerstone of the foundation built around being relevant to a user. Stage 1 for growth is to let the user control his data. Stage 2 for growth is letting the user control the data he creates about his data and other data he may have interacted with, be it his friends photos or eBay’s auction site. I don’t know what is after that, doing 1 and 2 will be hard enough, but it is nice to see people are trying really hard to make it happen.

I'm calling out Tony Lewis, Verizon Wireless’ newly-appointed VP of Open Development, for saying this sentence: “The only way this...