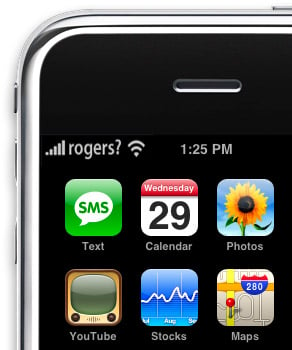 There are a lot of positives to living in Canada. Unfortunately, access to the newest and higher-end mobile phones is not one of the upsides to living North of the border. Rogers Canada is the country’s premier (read: only) GSM provider, and with a lack of any real competition, the cost of GSM data plans has been prohibitively high on Rogers’ network.

Well, things are looking up for Rogers customers. Word on the street has it that the Nokia N95 is due to hit Rogers’ GSM network on May 2. The Canada-bound variant of the Nokia N95 should hit market sporting the same 5 megapixel camera,  GPS receiver, WiFi, TV-out, and 3G HSDPA data connection that the US enjoys. And, with the help of Rogers, the Nokia N95 should be able to make use of its video call camera.

Pricing for the Nokia N95 on Rogers is reported to hit $699 without contract.

And, all you Canadian iPhone hopefuls (those of you that haven’t already jumped across the border for an unlocked iPhone) may soon be able to get your hands on a Rogers-locked Apple iPhone in the near future. The Toronto Star cites industry sources as indicating that Rogers is gearing up to launch a touchscreen-based handset campaign with the release of the master of touchscreen handsets, the Apple iPhone. The iPhone’s entry into Canada has been speculated to as being held up by the country’s costly GSM data plans. But, with the  launch of the Rogers’ $20 unlimited data plan, the “Communicate Value Pack,” Rogers is believed to be preparing to receive the heralded iPhone.

The iPhone is said to hit Canada some time between May and July. The purported timing of the iPhone in Canada points to the release of the 3G iPhone ahead of RIM’s BlackBerry 9000, giving Apple a head start in RIM’s home country.

While the rest of the world waits for Nokia to release solid pricing info on the WiMAX-enabled variant of the...