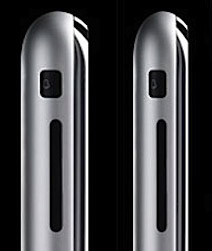 If Leander Kahney is to be believed, the next-generation iPhone will be 22% thinner. Kahney cites “a programmer at a major software publisher,” in his speculation that the 3G iPhone will launch with a considerable bit of girth shaved off from the current generation iPhone.

The 3G iPhone is said to not only sport integrated GPS, better battery time than the current-gen iPhone, and a whopping 16GB or 32GB of storage, but will apparently pack all that goodness in to a casing that’s 22% less thick than the iPhone currently in millions of pockets. It’s not clear if the new iPhone can achieve longer battery life with the 3G radio enabled or if the longer uptime can only be attained with the 3G radio disabled.

Remember, Apple (Steve Jobs) said that 3G was not an option for the first iPhone because of battery life concerns. So, speculation of better battery life raises the question of just how Apple managed to overcome the 3G radio’s power consumption issues.

There’s also mention of Apple allowing the iPhone to be sold with a subsidy. The speculation that Apple will be giving carriers the opportunity to sell the next-generation iPhone at a discounted price point is rooted in UBS Investment Research’s claims that the 3G iPhone could sell for around $200 in the UK.

If the new iPhone launches with real-deal GPS, video conferencing, longer uptime and massive storage, we’d be more than happy. Now, if Apple does all that while shaving off almost one-fourth of the iPhone’s thickness, well, you can color us impressed.

Note: The image above is a mock-up, showing the relative size of a 22% thinner iPhone.