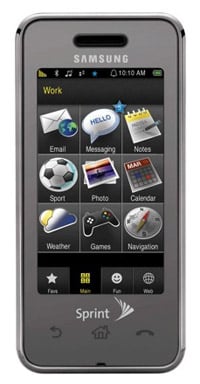 Apple and Steve Jobs threw us all a slight curveball by announcing an incredibly low-priced iPhone 3G – even Sprint, was taken for a loop. Not to be outdone by Apple and AT&T, Sprint has announced its new price-point for its iPhone 3G-fighter, the Samsung Instinct.

Sprint wants you to seriously consider spending your $200 on their CDMA-flavored Samsung Instinct, rather than handing over that cold, hard cash to AT&T for an Apple iPhone 3G. And, it’s probably not all that coincidental that Sprint waited for Apple to announce the iPhone 3G at WWDC 2008 before going live with its own pricing schedule.

But, it’s not all cheap-fun and low-priced games at Sprint. The No. 3 US wireless carrier is offering the Samsung Instinct for $200 only when purchased with new contract and rebates are applied. Instinct hopefuls looking for a good deal will find that Sprint is requiring them to sign up for on of Sprint’s Simply Everything plans to get in on that low, low $200 price point.

In the end, it’s the consumer that reaps the benefits of tooth-and-nail competition.

Graphics in the mobile space are no longer relegated to the 2D-dominated gaming landscape. With nVidia throwing their hat in...