Another day, another record. Or so it seems for Sprint’s incredibly popular Samsung Instinct. Priced at $129.99 after $100 mail-in rebate and a 2-year contract, Sprint’s partner, Best Buy, has just announced that the iPhone-fighting Samsung Instinct has set 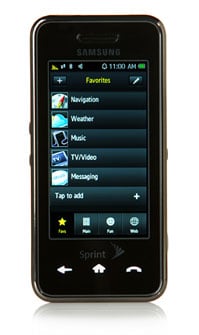 a new record for the big-box retailer. The Sprint Instinct is now the best-selling handset to have graced Best Buy’s inventory in the past two years.

The news comes on the heels of Sprint’s own announcement that the Instinct has proven to be the hottest-selling EVDO handset in the carrier’s history. “Phones such as the Samsung Instinct from Sprint have helped Best Buy deliver the latest and greatest in technology to our customers,” said Shawn Score, president of Best Buy Mobile. With GPS, mobile TV, (pseudo) haptic feedback touchscreen, and full-HTML web browser, the Samsung Instinct is some of the greatest technology to be had on Sprint’s network. And, the Instinct comes boxed with a 2GB microSD card and 2 sets of batteries to help users get to enjoying their Sprint Instinct right out of the box.

Sprint looks to have a real winner on its hands with the Samsung Instinct, and it’s not hard to see why.

Following on the CDMA HTC Touch Dual's appearance on the FCC's website, as the HTC NEON400, we're hearing that Sprint...