Immediately prior to the launch of the iPhone3G last Friday, comScore served up some tasty stats on what effect both the iPhone and 3G (independently) had had on content consumption – I guess the idea being that this data is the ‘before’, and after a couple of months, we’ll get the ‘after’…
So the stats are a summary of iPhone consumption compared with the market and other smartphones, as well as the effect 3G has on mobile content consumption. 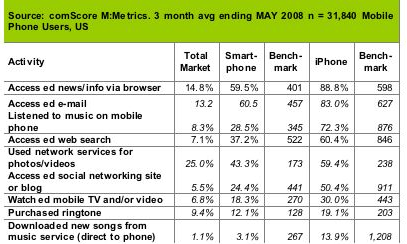 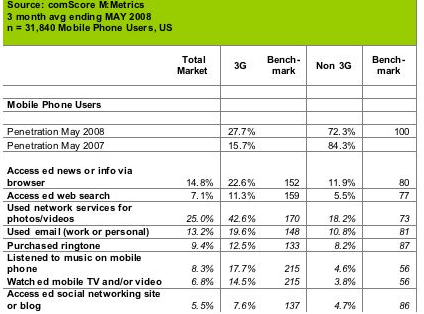 While the lift in mobile content consumption from 3G is not as high as it is from the iPhone, it is considerable, as 3G subscribers are at least twice more likely to use mobile content than non 3G subscribers. The disparity is greatest for high-bandwidth activities such as watching mobile video, where the percentage of those watching video on 3G enabled devices is four times greater than the percentage of those using non-3G devices.
So all I am waiting for now is that new set of stats that will tell us how well the iPhone3G is doing for content consumption – and I am not really sticking my neck out by saying that it’s going to be several times higher again….!