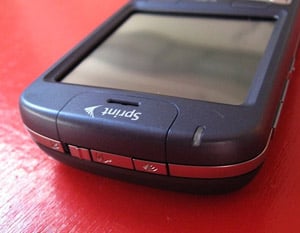 If you haven’t heard of the Sprint Palm Treo 800w, then consider this your remedial refresher on Palm’s latest Treo flagship.

Palm has been in a bit of a smartphone-slump as of late. Their consumer-oriented Palm Centro was a sure hit among the smartphone-curious with low-end budgets. But, the Palm Centro wasn’t enough to boost Palm back to their once glorious position as the king of smartphones.

So, in an effort to revitalize its smartphone business, Palm has been working hard to push out a new Treo flagship that it hoped would help the company claw its way back to the top (or at least further away from the bottom) of the smartphone market. Rumors and speculation swirled the intertubes in to a frenzy over Palm’s next-generation Treo badass, and more than a few leaks gave us insight in to what Palm had planned for 2008. Turns out, the recently launched Palm Treo 800w, available through Sprint, launched with nary a marketing-blip.

The folks over at Engadget Mobile have gotten their hands on the much-anticipate (and criticized) Palm Treo 800w, and they came away with the same impression we’ve been expecting for months. The Palm Treo 800w is a good handset. It does everything well. But, (and that’s a huge “but”) it can’t manage to do anything exceptionally well.

Some of the Palm Treo 800w’s pros are the first-ever application of both WiFi and GPS in the same handset. The GPS receiver isn’t too quick to lock-on to your location, but it does a good enough job to help you find your way around town. The WiFi radio can be toggled on and off conveniently with a “one touch” button on the top-edge of the device – a great feature that should help cut down on menu-navigation through Windows Mobile’s network connection configuration.

The QWERTY keyboard gets high marks for its tactile feedback and ease of use. And, the new 320×320 display gives the user a bit more screen real-estate and clarity over previous-generation Palm smartphones.

Along the side of the Palm Treo 800w resides the microSDHC card slot that can take up to 8GB microSD cards. Add to that EVDO Rev. A data speeds that are nothing to laugh at, and you’ve got the makings of a solid smartphone.

But, is it enough to be a solid performer in today’s uber-competitive smartphone market? Not so much.

Amongst competitors like HTC’s VGA-toting HTC Touch Diamond, Sony XPERIA X1, and Samsung BlackJack III, the Palm Treo 800w fails to make a splash in a feature-packed pool of chic smarpthones. The recessed touchscreen is reportedly a nightmare to use with any type of manual appendage – the stylus will be your best friend when using the Palm Treo 800w.

The exterior styling leaves so much to be desired that we could imagine Palm having siphoned off their industrial design budget to ensure the company picnic was well stocked with chips and soda.

In the end, Palm’s newest flagship Treo amounts to a ho-hum user experience that isn’t going to be much competition for the serious Windows Mobile offerings from their rivals. But, if a dated design and middle-of-the-road Treo is what you’re looking for, the Palm Treo 800w might be a good fit. Just don’t pay full price, you’ll regret it.

HTC, again proving that they are undoubtedly the people's handset manufacturer, has released their own HTC Touch Diamond ROM that...