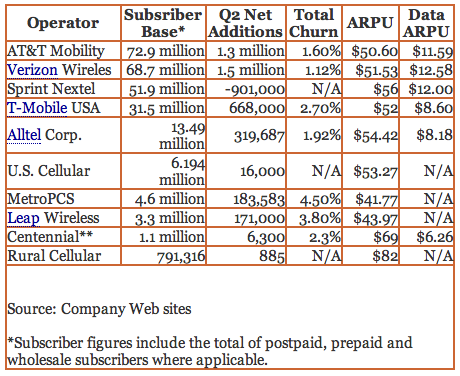 RCRWireless has compiled a list of the Top Ten US Wireless Carriers for 2Q 2008. There’s no big surprise here, with AT&T still leading Verizon as the top two US wireless carriers. But, the data is still interesting to look at.

We see that AT&T is still No. 1 in the rankings, but only just. Verizon added 200,000 more wireless subscribers in Q2 2008 than did AT&T. And, Verizon’s recent acquisition of Rural Cellular wasn’t factored in to Verizon’s customer-base because the deal was finalized after the close of Q2 2008.  Of course, once Alltel is wholly absorbed into Verizon, we will see AT&T dropping down to the No. 2 spot as AT&T takes the lead.

And, T-Mobile saw its customer churn jump from 2.6% to 2.7%, which they attribute to the expiration of the recently-introduced 2-year contracts.

And you thought you paid a lot for your launch-day iPhone 8GB? Think again. As expected, Apple is bringing the...