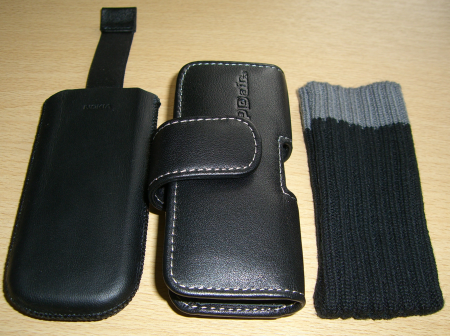 Having had the 8800 Arte for a few weeks now, one major concern of mine is trying to make sure it’s beautiful little case doesn’t get scratched – it has a very shiny finish, so anything that happens to it drop-wise, could potentially ruin it.

In that respect, I invested in a couple of cases, to try and figure out what the best solution is here – a combination of looks, protection, practicality, and cost were the criteria for assessment….

Nokia’s own 8800 Arte case (left in pic) – well, you do get a case from Nokia. It’s “free” in the pack, and is nicely constructed. But to my mind, it sucks a bit. First of all, it’s VERY tight on the device, which is never good for casings or buttons. Second, the method of getting the device out of the pouch is via an internal drawstring – which obviously rubs the case as it contacts it, to pull it out. Overall, I wasn’t that impressed

PDair leather case (middle in pic, from Mobilefun.co.uk) – It’s strange to think that of the many cases available for the 8800, only a few (that I could find) are made specifically for it – with a case that doesn’t fit, you are going to get rattling of the device inside, plus potential damage. So PDair’s £20 custom-made case is more of what I wanted. The belt loop is made from a leather hook (rather than a clip-on catch), which is easier to fit, but also easier to come off. The case does look really professional, and doesn’t impede you sitting down. Only downside I could see is that the top of the case exposes the phone, so if this were to come off and land upside down, you could still have a scratched phone. A minor point really, and a great solution overall!

Phone sock (right in pic, from Mobilefun.co.uk) – the sock came as part of a coloured 3-pack, costing £4.95 – bargain! The sock hugs the device nicely, and really is more of a protector from surfaces, and the insides of pockets, than a case. But it does it’s job very nicely, and can act as a neat “coaster” for your device when out on a table. Much more casual than the PDair, it’s a cheap and actually quite cheerful solution, which again I thought fitted a niche well!

Overall then, from a professional perspective, the PDair works well. The socks work nicely when you are out with friends, and a belt clip isn’t appropriate. I won’t be using the Nokia case, because of my concerns about the ejection mechanism strap fouling the device….

Following on from Will's post about the new Nokia 8800 Carbon Arte, I thought now would be a good time...